Making hundreds of thousands of families poorer, and then making some a little better off, does not count as a child poverty reduction plan, writes Nicola Smith. 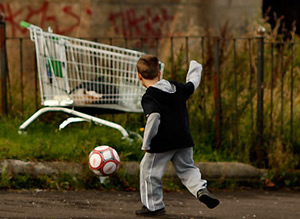 Last week much was made of the impact that Universal Credit will supposedly have on poverty levels, with the Secretary of State for Work and Pensions, Iain Duncan Smith, claiming “350,000 children” will leave poverty as a result of the reform.

But all is not as it seems. The Department for Work and Pensions’ impact assessment for Universal Credit (UC) does state that, “on reasonable assumptions, the combined impact of take-up and entitlements” might lift around 350,000 children out of poverty.

However, crucially, the department are comparing “Universal Credit with the benefit and Tax Credit system projected forwards to 2014/15”.

It’s worth remembering the scale of the welfare cuts the government is proposing. Over the next few years significant reductions will be made in benefits paid to children and families.

• The three-year freeze in Child Benefit;

• The cuts in Housing Benefit (many of which will affect families with children);

• The removal of the Baby Element of Tax Credits;

• The abolition of the Health in Pregnancy Grant;

• The abolition of the Child Trust Fund;

• The cuts to the Sure Start Maternity Grant;

• The reversal of the proposed Toddler Tax Credit;

• Cuts to disability benefits; and

• The indexation of all benefits to CPI to name but a few.

The TUC has calculated that these cuts could leave a duel earner family on minimum wage worse off by more than £2,700 a year. Family Action has found that the poorest families with new babies will lose more than £1,700 annually. These are significant reductions in family incomes which will have real consequences for children’s lives and future prospects.

And it also turns out the Institute For Fiscal Studies undertaken research to estimate how many children will be affected.

In a study funded by the Joseph Rowntree Foundation they have estimated that between 2011-12 and 2013-14 government policy will lead to the number of children living in relative poverty increasing by 300,000 – with absolute poverty levels rising by half a million. These changes result from the benefit cuts the government has committed to introduce over the next three years.

IFS’s research does not forecast forward to 2014-15, but it seems fair to presume that, given their analysis shows 100,000 and 200,000 children a year respectively are moved into poverty as a result of the benefit reductions over each preceding years, as a minimum the government’s cuts will mean another 50,000 will be moved into poverty in 2014-15 (compared to the current, pre-June 2010 Budget, system).

In other words, between now and 2014-15, at least 350,000 children will move into relative poverty as a result of the coalition’s benefit cuts. Then, when Universal Credit comes along, 350,000 may be moved out (mainly as a result of increased benefit take up).

Given the scale of the impacts in absolute poverty that the IFS forecast, it also seems likely that whatever Universal Credit achieves the cuts to benefits for families in the UK prior to UC’s introduction will mean that absolute levels of child poverty are higher than at present.

This outcome is very far removed from the DWP’s recent spin – and calls into further question the government’s commitment to the abolition of child poverty. Making hundreds of thousands of families poorer, and then making some a little better off, does not count as a child poverty reduction plan.

Thanks to Chris Goulden for pointing me to the IFS research.