David Cameron is keen to portray claiming benefits as a lifestyle choice - but there is now a long list of objective research, that reveals life on benefits is no easy ride. 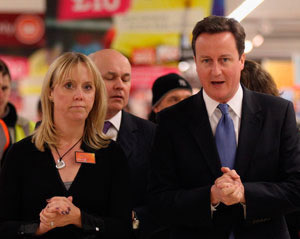 In the process of selling the Welfare Reform Bill to the electorate, the government, with enthusiastic backing from the tabloid press, has been keen to portray claiming benefits as a lifestyle choice. However, there is now a long list of objective research, covered in a new TUC report, that reveals life on benefits is no easy ride.

Benefits in the UK are already comparatively lower than other industrialised countries. Since 1980, benefits have been up-rated in line with prices alone rather than whichever was higher of earnings or prices. The net effect of the change is that the relative value of benefits has declined significantly.

If Jobseeker’s Allowance had been increased in line with earnings over the last 30 years, the rate for a single person over 25 years of age in 2007 would be £113.26 as opposed to £59.15 in that year (JSA is now £65.45). This is a situation that will be exacerbated by the Government’s decision to up-rate benefits in line with CPI rather than RPI.

As a result, the welfare expert, Peter Kenway, concluded that the current value of JSA is not sufficient for the essentials of life, such as food, bills and travel.

• A fifth of the actual, average expenditure of single adults;

• Half of the actual, average expenditure of single adults in the poorest households;

• Half of the government’s (income) poverty line for single adults;

• Two fifths of what a consensual view among members of the public (ratified by experts) say is needed to reach a minimum standard of living.

Numerous other studies have come to similar conclusions to Kenway.

The Government’s plans to further reduce the value of benefits in an attempt to save money is thus not only morally questionable, it will also prove a false economy.

For example, the Joseph Rowntree Foundation estimate that child poverty costs £25 billion each year – £12 billion is spent on dealing with the social fallout from child poverty and a further £13 billion is lost through the economic damage done by child poverty.

And, of course, benefits are an important route to the reduction of inequality. As Wilkinson and Picket show in The Spirit Level the costs to society, the economy and taxpayers rises significantly the more unequal the country.

The spending cuts of the early 1980s resulted in benefits severely losing their value. Since then a wide range of research has shown that life on benefits has become even tougher and that inequality has risen with significant costs to the taxpayer and wider society. We cannot afford to repeat the same mistakes of the early 1980s in 2011.

Unfortunately, the government seems determined to do just this.

31 Responses to “Getting by on benefits is no easy ride”