The Tory-led NO to AV campaign have over-stepped the mark with their latest advert against the alternative vote. 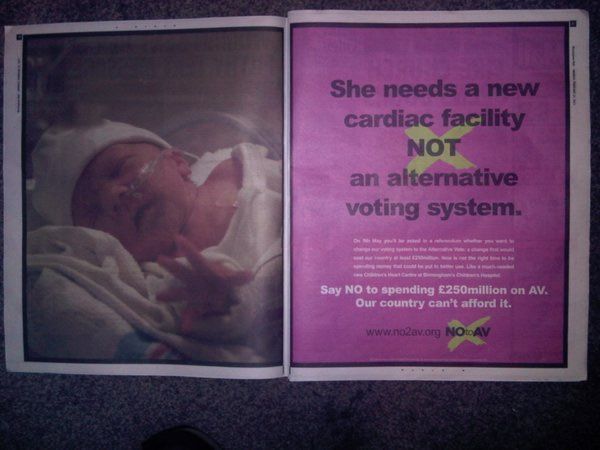 Judging by the reaction on twitter, the Tory-led NO to AV campaign have over-stepped the mark with their latest advert against the alternative vote.

Yesterday’s Birmingham Post carried this picture bearing the legend ‘She needs a new cardiac facility NOT an alternative voting system”.

The ad, which is due to be rolled out to national publications in the coming days, goes on to remake the discredited claim that £250 million would be spent on AV. As Left Foot Forward and Next Left showed last week the £250m includes £130m for electronic vote counting machines which are unnecessary and the £82m cost of the referendum which gets paid regardless of the result.

More galling than the false claims are those behind the attack ad which seeks to play on the public’s concerns about cuts. The No to AV website outlines that £250m could be better spent on “2,053 doctors, 5,719 police officers, 6,297 teachers, 8,107 nurses, 36,000 hip replacements or 60,000 school places.” But campaign chief, Matthew Elliott, was the man behind the TaxPayers’ Alliance’s joint report with the Institute of Director’s in September 2009 titled ‘How to save £50 billion‘, which recommended now-adopted coalition policies including cutting Sure Start and abolishing Education Maintenance Allowances.

Without a hint of irony, the frontpage of the No to AV website today even asked whether the money could be better spent on the Sheffield Forgemasters loan which was scrapped by George Osborne. But they were found out by the Financial Times’ Christoper Cook who reported that the Department for Business said it was untrue that the loan would be reinstated if there was a ‘No’ vote in May.

The approach is exactly as predicted on Left Foot Forward in November. With polls today showing quite how tight the referendum has become it seems there is no limit to how low the No campaign will stoop.

189 Responses to “The nasty campaign: NO-to-AV stoops to new low”