Searchlight, the group behind the anti-BNP 'HOPE not hate' campaign, have today published Fear and HOPE, a report examining British attitudes towards culture and identity in the 21st century. 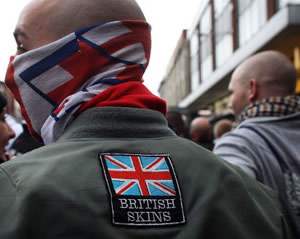 Searchlight, the group behind the anti-BNP ‘HOPE not hate‘ campaign, have today published Fear and HOPE, a report examining British attitudes towards culture and identity in the 21st century. Based on 5,054 discrete interviews with a cross section of British society, it paints a fascinating and concerning picture.

The report’s key argument is that traditional class-based, left-right models of British politics still have some relevance, but they need to be understood alongside “a new politics of identity”, in particular:

“The politics of immigration, a politically active issue in the decade past, has morphed into a politics of culture, identity and nation.”

Therefore, while extremist, fascist and racially-motivated political forces remain a matter of concern, the report warns that these are likely to be consumed within a “new politics of identity”, potentially by movements which enjoy a level of superficial respectability.

The EDL and UKIP are identified as groups which are adapting well to the new post-immigration environment, whilst the BNP are described as having “failed to adapt” and “sinking under the weight of their own negative image”.

Some of the report’s findings about the British public’s political views related to culture, identity and nation are particularly concerning:

• Attitudes to immigration have hardened, with a ratio of 60:40 thinking it has been a bad thing for the country;

• 71% support the statement “there is an increasing amount of tension between the different groups living in Britain”;

• There is a 50:50 split on the question of whether there is a ‘place for every kind of person in this country’ or ‘some people are just too different to fit in’;

• There is popular support for a sanitised, non-violent and non-racist English nationalist political party.

Other findings, however, are more positive:

• More than two-thirds of people view ‘English nationalist extremists’ and ‘Muslim extremists’ as being as bad as each other;

• 60% of respondents thought that positive approaches – community organising, education, and using celebrities and key communal movers and shakers – were the best way to defeat extremism in communities;

• There is a real appetite for a positive campaigning organisation that opposes political extremism through bringing communities together. More than two-thirds of the population would either ‘definitely’ or ‘probably’ support such a group.

What, then, can be done about the threat of far right identity politics?

The first stage, according to Searchlight, is to understand the identity-defined “new tribes” into which society can be divided. Two groups in particular are deemed to be of importance:

• Identity Ambivalents (28% of the population)

These people are less financially secure and less optimistic about the future. They are more likely to be working class, to live in social housing and to view immigration through the prism of its economic impact on their opportunities and the social impact on their communities. Muslims and other BME (Black Minority Ethnic) groups are more prevalent here as are the largest single segment of those who identify with Labour.

Generally older and more prosperous than other groups, many are (or have been) professionals and managers. They are more likely to view immigration as a cultural issue with concerns about the impact of immigration on national identity and about immigrants’ willingness to integrate. This group forms the largest segment of those identifying with the Conservative Party.

Together, these two groups comprise more than half the population and they should, according to the authors, be considered “the mainstream”. Searchlight also advise that attempts to address right-wing extremism should focus on building a “firewall” between these two groups and the far right, something which mainstream political parties are largely failing to do.

For example, David Cameron’s recent Munich speech about multiculturalism is described as being:

“…well adapted to the language and outlook of Cultural Integrationists who are more strongly Conservative identifiers than any other group… However, on the basis of the Munich speech, the Prime Minister’s strategy is pitched very narrowly and is more rhetorical than substantive. In other words: it is insufficient.”

The Populus survey does not support the assertion that there is a ‘progressive’ majority. It suggests that there is a solid anti-progressive block (47% – Cultural Integrationists, Latent Hostiles and Active Enmity), a solid progressive cohort (24% – Confident Multiculturals, Mainstream Liberals), and a rump (28% – Identity Ambivalents) which simultaneously displays progressive and non-progressive attitudes.

The report identifies a serious risk that Identity Ambivalents, the single largest group, will feel sidelined by Mr Miliband’s focus on the “progressive majority” and unmoved by Cameron’s “muscular liberalism”. Moreover, their alienation is likely to be exacerbated by Mr Cameron’s economic policies.

The report also highlights certain key traits of Identity Ambivalents. Coupled with the report’s warning that the lack of a popular far right party in the UK “is not because British people are more moderate but simply because these views have not found a political articulation”, these underline the danger of failure to engage with Identity Ambivalents:

• They are the most likely group to shift their political allegiance, potentially to a far right party;

• They are less likely than Cultural Integrationists to see violence, or the threat of violence, as sufficient to make them change their mind about supporting a campaign.

As Jon Cruddas MP writes in the report’s foreword,

“The real floating voters, primarily ‘identity ambivalents’ – appear to be on a journey away from all major parties. This poses the very real threat of a new potent political constituency built around an assertive English nationalism…

“The core message of hope contained within [the report] is that people share a common sentiment, a search for a common life even – built on a desire for belonging and security, which does indeed create possibilities for an optimistic ‘new politics’ but only if the mainstream political parties step up.

“The jury is out. This is a profoundly important text.”

Having explained the outdated nature of traditional approaches to issues of culture and identity, the report lays down an important challenge to Labour. Failure to engage Identity Ambivalents in a productive dialogue will not only hamper the party at the ballot box, it could have serious consequences for cohesion across the country.