If today's retail sales data is a true indication of the underlying trend in retail sales, then the economy is in better shape than many of the pessimists have feared. 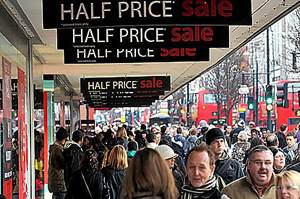 The ONS’s statisticians suggest looking through last December and comparing November 2010 with January 2011. This shows an increase in sales volumes of 0.5 per cent (a fall of 1.4 per cent followed by an increase of 1.9 per cent). That’s an annual rate of 3 per cent.

If this is a true indication of the underlying trend in retail sales, then the economy is in better shape than many of the pessimists have feared.

Retail sales growth of this magnitude combined with continued strength in manufacturing output (as suggested by all the surveys) would guarantee a decent outcome for overall economic growth in 2011, despite severe cuts in government spending.

However, there are some dangers in concluding that the experience of two months – particularly two months affected by unusual factors – are indicative of an underlying trend. For example, many retailers chose not to pass on the increase in VAT immediately in January, and this could have artificially boosted sales. Over the preceding four months (July to November) sales increased by just 0.2 per cent and it is not clear that the underlying drivers of spending changed significantly for the better in December and January.

Furthermore, as the Governor of the Bank of England pointed out in a recent speech, household real incomes are being squeezed more severely than at any time since the 1920s. Latest figures show average earnings up by less than 2 per cent, while consumer price inflation is running at 4 per cent. And unemployment is also increasing. Most economists would accept that it is hard to imagine retail sales increasing significantly in such circumstances.

So only raise half a glass for these latest numbers. They show the economy is not faring as badly as the fourth quarter GDP numbers suggested, even after allowing for the weather (and, though it is early days yet, point to a significant rebound in GDP in the first quarter of 2011). But don’t extrapolate the experience of the last two months and assume that all is well with the UK economy.

Households’ spending power is being cut into by soaring food and fuel prices, while wage increases remain moderate at best. The full effects of the increase in VAT to 20% have yet to be seen. And national insurance contributions increase for many from April.

Unless people are prepared to borrow more, or to dip into their savings, increases in retail sales will be hard to sustain in coming months.

4 Responses to “Retail sales provide some economic optimism – for now”