The UK’s public finances were in much better shape in January than expected. There was a current budget surplus of £8.5bn and public sector net borrowing was -£3.7bn. 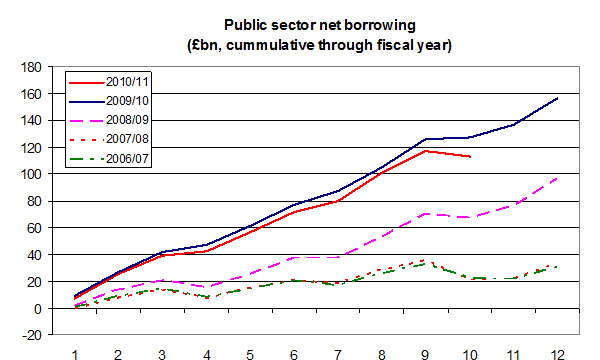 The UK’s public finances were in much better shape in January than expected. There was a current budget surplus of £8.5 billion (compared to £4.1 billion in January 2010) and public sector net borrowing (PSNB) was -£3.7 billion (£1.3 billion a year ago).

January is an important month for tax revenues, because it is the deadline for a range of tax payments and a surplus is normally recorded. As a result of these figures, the cumulated deficit on the current budget over the first ten months of the 2010-11 financial year is £85 billion and net borrowing is £113 billion.

First, the strength of revenues – for January and for the financial year to date – do not appear to be consistent with the weak fourth quarter GDP numbers (showing a 0.5 per cent decline).

There are lags from output growth to revenues, so care is needed, but a tentative conclusion would be that the public finances suggest the economy is doing a bit better than the GDP numbers suggest.

Second, if the Office for Budget Responsibility takes the higher level of revenues in 2010-11 as its starting point for the budget projections, then it will be revising down its estimates of deficits in future years. This will give the Chancellor a fair few billion pounds to play with on March 23rd.

He could choose to cut taxes, to spend a bit extra on a few pet projects, or to be ‘prudent’ and accept the lower path for the deficit; of course, if he chooses prudence (and the deficit remains on the new lower path), then he would be in a position to cut taxes or increase spending nearer the election.

9 Responses to “Buoyant tax revenues give Osborne room to manoeuvre”