David Cameron endured one of his worst Prime Minister's Questions today, under fire over the 'Big Society' and Sure Start, and now shown to have misquoted John Healey. 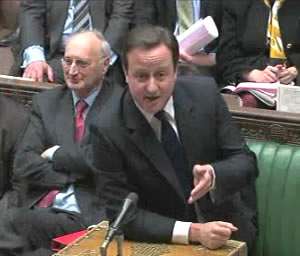 David Cameron endured one of his worst Prime Minister’s Questions today, mocked by Ed Miliband over the ‘Big Society’, found wanting on Sure Start (as broken by Left Foot Forward earlier this afternoon), and now shown to have selectively quoted John Healey – all on the day it was revealed 50 per cent of Tory funding comes from the City, double the proportion of when he became leader.

“The provisions of the Health and Social Care Bill were not costed before or after the election, and given the extension of commercial providers, is it the case that the NHS is not safe in the hands of the government but that their hands are in the safe of the NHS?”

To which he replied:

‘No one in the House of Commons knows more about the NHS than Andrew Lansley, Andrew Lansley spent six years in opposition as shadow health secretary.

‘No one has visited more of the NHS, no one has talked to more people who work in the NHS than Andrew Lansley, these plans, these plans are consistent, coherent and comprehensive, I would expect nothing less from Andrew Lansley.’

“That is Labour’s shadow health secretary; I couldn’t put it better myself.”

“The Health select committee concludes – in so many words – and as I believe, that these are the wrong reforms at the wrong time, ‘blunting the ability of the NHS to respond to the Nicholson challenge’ to improve services to patients and make sound efficiencies on a scale the NHS has never achieved before.”

“In politics and public policy I think we often look and talk too much about ‘what’ we’re doing, and not enough about ‘why’. The ‘why’ questions: why the huge disruption and distraction, when the general aims are simple to achieve? Why the waste of £2-3 billion, when NHS finances have never been tighter? Why now? These why questions have a straightforward answer.

“Andrew Lansley is a Conservative. Like Oliver Letwin, George Osborne and David Cameron – who’ve all now given him backing – he believes in the free market. David Cameron said twice at Prime Minister’s Questions yesterday that the Government wanted a ‘level playing field’ for private health providers. They believe that competition drives innovation, that price competition brings better value, that profit motivates performance, and that the private sector is better than the public sector.

Hardly a ringing endorsement of the government’s health policy – that last paragraph in particular.

“It’s one thing for the Prime Minister to misrepresent what I’ve said in a speech but quite another for him and his ministers to continue to mislead the British public about the Tory-led government’s plans for the NHS.

“They are acting dishonestly, not telling the full story about their planned shake up of the NHS while at the same time claiming support from patient groups and health professionals whose criticisms far outweigh what they welcome.”

Last week, Left Foot Forward made precisely that point, reporting the deep misgivings of the King’s Fund, NHS Alliance, NHS Confederation, Royal College of General Practitioners and The Nuffield Trust over the government’s health reforms. None of them appear to fully support the prime minister’s plans, and the shadow health secretary sure as Hell doesn’t, once again prompting the question: Who does?