Ulster Unionist Party health minister Michael McGimpsey has been forced to deny that he intends to resign following a series of high profile spats with ministerial colleagues on the Stormont Executive. 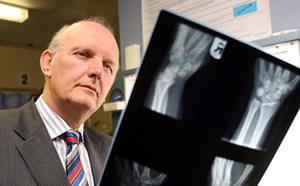 Ulster Unionist Party health minister Michael McGimpsey has been forced to deny that he intends to resign following a series of high profile spats with ministerial colleagues on the Stormont Executive.

In December, the Democratic Unionist Party finance minister, Sammy Wilson, published a draft budget which included plans for cuts to the Department of Health of £113.5 million. It led to serious concerns being voiced publicly by the health minister who explained:

“I’m not satisfied, I have not agreed that. I made it quite clear to Sammy Wilson and the Executive colleagues I do not agree that.

“Whilst you can bandy figures around, weasel words over percentages, the fact is health’s the big loser over this, losing over £100m in monies from a budget that is already seriously under-resourced.”

McGimpsey’s remarks were just one in a series of outspoken attacks the on Wilson for failing to adequately provide for the health service in Northern Ireland, a spat which has reached new levels.

Speaking over the weekend, first minister Peter Robinson argued that if more money were available, the health service would not be the top priority, citing other departments as having greater needs.

“Michael McGimpsey has continually used the health service in a cynical attempt to undermine the Executive; he was and remains a semi-detached member of these institutions. The community are rapidly losing confidence in his ability to run the department as it lurches from one crisis to another.

“The reality is that Michael McGimpsey has sat on numerous Executive papers, including cross-border papers, which would deliver significant efficiencies and savings. Instead he constantly looks to his Executive colleagues to continue and bail him out.”

Speaking to the Newsletter, however, McGimpsey has explained that he has no intention of resigning, despite the open split that now exists on health spending. He told the paper:

“I have a duty to deliver health and social care to the population of Northern Ireland. My brief is to deliver that care, free at the point of delivery. That is my principle, I am sticking to it and will continue to do so.

“It is unfortunate under the draft budget the executive are not according the sufficient resources to allow me to do that but I shall battle on.”

His remarks come amidst growing acrimony at Stormont over a budget that SDLP leader Margaret Richie has dubbed “lazy and unimagainative”, with SDLP social development minister Alex Attwood arguing:

“The recent aggressive behaviour displayed by Peter Robinson and Martin McGuinness towards those who dissent from their draft budget is very disturbing and is not a healthy or clever way to conduct politics.

“Those who have criticised the budget such as the SDLP, Ulster Unionist ministers and others do so because there is much to be critical of. But the reason Peter Robinson and Martin McGuinness are acting in this way is because they know there is much public anger about this draft budget.

“They have settled on a strategy of attacking critical voices in order to distract from the wildly-held view that they have failed to produce a budget fit for purpose.”

With the executive due to meet on Thursday, and members of the Assembly due to vote on the budget plans next Monday, UTV’s Political Editor, Ken Reid, has previously tweeted:

And on Monday last week, the Alliance challenged the SDLP to leave the Executive altogether if they felt they could not support the budget.

As politicians continue to battle out what is fast turning into a battle of attrition, it is perhaps the clearest possible reason for UUP leader Tom Elliott’s call last week for an end to the legal obligations to form coalitions in Northern Ireland.

With elections now a matter of weeks away, there are few signs that the temperature at Stormont looks set to cool.

7 Responses to “Bitterness and acrimony over Northern Ireland budget”