Norman Tebbit has had an extraordinary dig at David Cameron over the Big Society and gay marriage in the Telegraph, ranting about a "Big Society gay wedding". 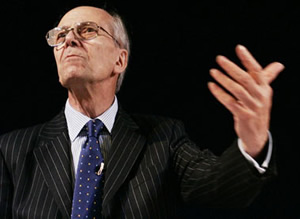 Norman Tebbit, in between ranting that the Arab world “do not ‘do’ democracy”, defending the poll tax, criticising the government for backing down over its plans to sell off forests and describing Ken Clarke and Nick Clegg as “Euro-collaboraters” [sic], has had an extraordinary dig at David Cameron over the Big Society and gay marriage.

In his Telegraph blog, Lord Tebbit of Chingford writes:

“Of course the Prime Minister’s ambition to restore our national finances, to improve the NHS, deal with the cancer of welfare dependency and restore education to our schools are plainly right and deserve support.

“But every Prime Minister has set out to do that. I still do not know where, apart from to a Big Society gay wedding in Westminster Abbey, the Prime Minister really wants to go...”

In a previous Telegraph blog post, Tebbit had written:

“David Cameron has the brains to turn the tables and come back to win. But he has to inspire the electors to believe he would make a difference not over the trivialities of dress sense or political asylum for African homosexuals…”

While in an interview in the New Statesman, the NS report:

“Tebbit’s views on gay lifestyles are so uncompromising that one wonders quite what in his past life – a bleak upbringing by his ‘on yer bike’ father, Len, a former pawnbroker; a stint in the RAF; a career as a civilian pilot – might have installed such a rigid mindset.

“He believes, for instance, that no gay minister should be Home Secretary. (‘The Home Office is responsible for laws affecting society – the adoption of children and the strengthening of the family. It is better not in the care of someone who doesn’t feel for those issues.’)

“Equally preposterously, he grumbles about the number of gay people in government. ‘If you accept that the male homosexual population is 2 per cent, it does seem to be a bit over quota.’

“Does he think that trend may be mirrored among Tories who dare not speak of their sexuality? ‘Probably so. There are one or two people I know who are very good and who, I suspect, may be homosexual.’

“Could he possibly mean Hague? ‘Nah . . . I think he and Ffion are very happy. Another daft thing about politics is that you can’t be celibate without people saying you’re homosexual. For example, there’s Ted Heath. He was celibate. But Ted wasn’t a raving queer.'”

In. Credible. But one thing’s for sure, with the likes of Tebbit lined up against him, this is surely the best news the prime minister’s had over the Big Society; if Tebbit thinks it’s a bad idea…