The No2AV campaign have claimed a no vote would result in the restoration of the loan to Sheffield Forgemasters - despite this being untrue and despite campaign director Matthew Elliott welcoming the cuts. 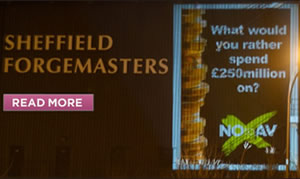 Alongside the posters of an ill baby – now downgraded to merely a crying baby – and a frontline soldier, the No2AV campaign have also been claiming the Sheffield Forgemasters loan would be reinstated if there were a no vote in May. Not only is this yet another false claim from the no camp – to go alongside their fictitious £250 million price tag for AV and ‘facts’ about Australia’s AV experience – but completely at odds with the views of No2AV campaign director Matthew Elliott.

At the time of the coalition’s axing of the £80m loan to Forgemasters, part of a £2 billion cull of projects announced by Danny Alexander in June, Elliott ‘welcomed the cuts’, saying:

“This announcement may be controversial but large-scale spending cuts must be made as soon as possible.”

“This, then, is how the No campaign will be playing it. With easy populist slogans, designed to spread confusion and exploit popular anger at the cuts.

“The irony, of course, is that the message comes from a mixture of Tories and TPA luminaries, people who have done more than anyone else to further the government’s cuts agenda.

“And make no mistake, they take the very opposite view of the cuts to the one implied by this video. They know that they have every reason to fear democracy.”

And as John Kampfner wrote in last night’s Standard:

“Whenever you think British politics has hit a new low, think again. The advertising campaign launched by the campaign against electoral reform defies the worst expectations.

“The most sick-making advert is of a baby, tube in nose, with the words: ‘She needs a new cardiac facility NOT an alternative voting system.’ Another only slightly less offensive variation has a picture of a soldier alongside the caption: ‘He needs bulletproof vests NOT…’

“…with no positives to fall back on, the ‘no’ camp resorts to scare tactics. One irony is that the baby in the picture is imperilled by public service cuts thirstily sought by Right-wing Conservatives.”

“Ultimately this referendum, on May 5, comes down to different visions of Britain. The ‘yes’ campaign tends to be supported more by the young and optimistic. The ‘no’ brigade is comprised mainly of Conservative Right-wingers who hate any form of change.

“These people opposed devolution for Scotland and Wales (now accepted as normal) and other forms of social change of past decades that have become part of the fabric of British life.”

• The AV referendum takes place in exactly ten weeks’ time, Thursday, May 5th; if you aren’t already registered to vote, you can do so via the Electoral Commission website here.

18 Responses to “What the No2AV director really thinks of Forgemasters”