After 18 days of demonstrations and three decades of dictatorship, Egypt finally rid itself of Hosni Mubarak tonight, sparking wild celebrations as Tahrir Square erupted with delight. 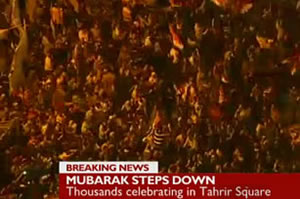 • After 18 days of demonstrations and three decades of dictatorship, Egypt finally rid itself of Hosni Mubarak tonight, sparking wild celebrations as Tahrir Square erupted with delight.

History made before our eyes, a nation reborn, a region shaken to its core; fireworks skimming the night sky, joy unconfined… but once the sand settles, and the future closes in, where does Egypt go from here, as it embarks upon the long and winding road to democracy? Writing on Left Foot Forward this evening, Omar Salem, a very proud Egyptian, outlined the steps that need to be taken:

For now, though, Egyptians will enjoy the moment, pinch themselves, remember the fallen, dream of the future and sing themselves to sleep… 30 years of hurt, never stopped them dreaming.

• Domestically, banks, bankers and the economy dominted the headlines, with the chancellor unveiling his banking levy plans and the Project Merlin lending and bonuses deal.

On Project Merlin, Duncan Weldon wrote on Left Foot Forward that the banks had been “let off the hook” on lending:

“Questions are already being asked about the failure of government to get tough on bonuses and the low level of transparency on pay, but perhaps most worrying is the failure to deal with the central question of bank lending to support the recovery…

“The agreement is for gross lending rather than net lending – i.e. it only refers, it takes no account of repayments on existing loans. It would be perfectly possible for banks to issue gross loans of £190 billion but fund this by calling in old loans. What matters for the UK is not gross lending but net lending..

“Furthermore, the agreement includes a let out clause for the banks:

‘Each bank’s lending expectations, capacity and willingness, as set out above, will be subject to its normal commercial objectives, credit standards and processes and regulatory obligations, as well as the availability of the required funding.’

“This potentially provides the banks with a ready made excuse when they fail to meet the targets.”

• Higher education remained at the forefront of the political agenda, with Cambridge University announcing it would charge the maximum £9,000 tuition fees and Nick Clegg embroiled in an access row.

“Looking first at the scholarships, and leaving to one side the fact they are a tacit admission higher fees will put poorer students off, students from the poorest backgrounds will actually be considerably worse off under the new system…

“Moving on to the access agreements… The government’s claim that institutions would only charge fees higher than £6,000 a year in exceptional circumstances is entirely bogus. Every single English institution with undergraduates will have to charge more than £6,000 just to plug the funding gap the government has created by slashing the teaching budget. The average fee will need to be £6,863.”

“Companies in a market like the one the government have tried to introduce into higher education work on the principle that a higher price equates to better quality; if you are Cambridge, or Oxford, or any of the other UK universities hoping for a place in the exclusive pantheon of the best universities in the world, your reputation is built on exclusivity, an exclusivity that disappears if you could charge more than you do…

“Without proper oversight and careful implementation, however, the most exclusive universities will become even more exclusive and the lecture halls of Cambridge will even more closely resemble classrooms at Eton.

In other education news today, Michael Gove was given a slap on the wrist for his brutal axing of the Building Schools for the Future programme – described by a High Court judge as “so unfair as to amount to an abuse of power” – while a new poll, reported by Left Foot Forward, revealed nearly half the public oppose the abolition of EMA.

Lord Oakeshott, who stood up to the coalition for their pitiful failure to take action on bankers’ bonuses – and was forced out for his troubles. As shadow chancellor Ed Balls said:

“It is symbolic of the shambolic and panicked way that the chancellor has gone about agreeing this weak and toothless deal with the banks that the Liberal Democrat Treasury spokesman in the House of Lords has been sacked… It is a sad commentary on this Tory-led government that Lord Oakeshott has been forced to pay the price for daring to tell the truth.”

The Top Gear triumvirate, rightly savaged by Steve Coogan this week for their unfunny, borderline-xenophibic remarks about Mexicans. Coogan branded Jeremy Clarkson, Richard Hammond and James May “uber-conservatives” whose attempts at humour are more tragic than comic. He wrote:

“The BBC’s initial mealy-mouthed apology was pitiful. It cited the more benign rivalry that exists between European nations (ah, those arrogant French, over-organised Germans), and in doing so neatly sidestepped one hugely important fact – ethnicity. All the examples it uses to legitimise this hateful rubbish are relatively prosperous countries full of white people. How about if the Lads had described Africans as lazy, feckless etc? Or Pakistanis?

“What’s more, this was all spouted by the presenters on one of the BBC’s most successful programmes, with ratings that could only fail to impress Simon Cowell (very fast lap time). Forget the World Service; overseas, Top Gear is more frequently the public face of the BBC.

“The Beeb’s hand-wringing suggested tolerance of casual racism, arguably the most sinister kind. It’s easy to spot the ones with the burning crosses. Besides, there is not a shred of truth in Top Gear’s ‘comic’ stereotype. I can tell you from my own experience, living in the US, Mexicans work themselves to the bone doing all the dirty thankless jobs that the white middle-class natives won’t do.”

Declan Gaffney’s article on Incapacity Benefit today, which set straight the misleading figures seemingly briefed by the DWP and swallowed hook, line and sinker by the right-wing press.

“How did the Telegraph, Mail, Sun and Express get it so wrong – and get it wrong in exactly the same way?”

Scotland: The Daily Record opened their report on the budget with the headline: ‘Desperate Nats forced into Con-Dem deals to save budget blushes’, following the news that MSPs voted to approve the SNP’s final budget before May’s elections – only after John Swinney was forced to make concessions to the Lib Dems and Conservatives to gain their support. Shadow finance secretary Andy Kerr said:

“The Cabinet Secretary has chosen his priorities. The country will soon have the chance to choose their priorities. A budget is a test of your values, a test of who you are and what you stand for. The SNP has shown us it stands with the Tories and the Lib Dems. They have no credible plan for growth or jobs and we cannot support them.”

The UK’s most senior civil servant Sir Gus O’Donnell, meanwhile, published papers concerning the release of the Lockerbie Bomber Abdelbaset Mohmed Ali al-Megrahi, with suggestions the SNP were looking to do a deal with the UK government in return for his release. Labour’s justice spokesman in Holyrood, Richard Baker, said:

“To my knowledge, this is the first time the IFS Green Budget has made any reference to the funding formula. In the so-called age of austerity, it is a clear indication how the inequity of the Barnett Formula is becoming a significant issue across the British state.”

“Ieuan Wyn Jones is the One Wales weak link. This is not a party political attack – his handling of the economic brief during tough times has been absolutely shambolic. He has lost the confidence and respect of Wales’ business community. Every businessperson I meet wants [former Labour economy minister] Andrew Davies brought back. Andrew understood the business community. Ieuan is out of his depth.

“We hope his incompetence doesn’t reflect badly on Labour in May. There’s no reason why it should but we are very aware of the problem. Labour will have a strong offer for Welsh businesses at the time of the election.”

Northern Ireland: It was a grim week in Northern Ireland as police arrested three men thought to have been attempting to lure police to their deaths in a bomb attack last month. It followed bomb alerts on the Antrim Road. Reports also suggested this week that one bomb was attached to a child’s bicycle.

Meanwhile, debate continued over a visit by the Queen to Ireland, with Gerry Adams explaining that he felt such a visit would be “premature and too soon”. Fine Gael Leader, and Ireland’s probable next Taoiseach, Enda Kenny, concluded that such a visit was “long overdue”, adding she would be “very warmly received”.