Hundreds of thousands of protesters took to the streets of Egypt again today, in "day of departure" rallies up and down the country, reports Shamik Das. 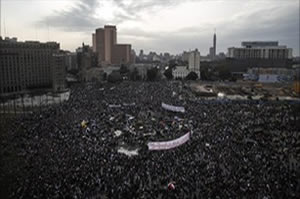 • Hundreds of thousands of protesters took to the streets of Egypt again today, in “day of departure” rallies up and down the country, most prominently in Cairo’s Tahrir Square, which has emerged as the focal point of the demonstrations.

President Mubarak, however, continues to cling to power – though there are reports tonight that a deal may be in the offing, one in which: he will be allowed to remain as president in name only; he will be allowed an “elegant” departure; vice-president Omar Suleiman will effectively be the man in charge; opposition protesters will be given guarantees they won’t be hunted down; and the Muslim Brotherhood will agree not to contest the Septemeber elections.

Speaking this evening, David Cameron called for an “orderly transition” in Egypt to “answer the aspirations of the Egyptian people with political reform, not with repression”, having earlier warned the Egyptian government it would “lose any remaining credibility and support” from Britain were there to be any further state-sponsored violence.

While the European Council issued a declaration that:

“…salutes the peaceful and dignified expression by the Tunisian and Egyptian people of their legitimate, democratic, economic and social aspirations which are in accord with the values the European Union promotes for itself and throughout the world.

“We emphasise that the citizens’ democratic aspirations should be addressed through dialogue and political reform with full respect to human rights and fundamental freedoms, and through free and fair elections. We call on all parties to engage in a meaningful dialogue to that end.”

Sentiments with which everyone surely agrees.

• The economy was once more the major domestic political issue – in particular the growing clamour for the coalition to come up with a ‘Plan B’ for economic growth.

On Wednesday, the Institute for Fiscal Studies urged George Osborne to develop a Plan B “in the medium term”. As Will Straw reported on LFF, the IFS Green Budget document summary says:

“It may therefore make sense for the government to consider ways of reducing the pace of fiscal consolidation should demand conditions deteriorate significantly – enabling it to ‘trim the sails’ again in the same manner that it did so last November.”

While the full report says:

“Although there may be no need to implement an alternative short- or medium-term plan at this stage, the Chancellor would be best advised to consider how he would respond to a changing – and, in particular, a worsening – outlook for the economy, the public finances or the quality and quantity of public services being enjoyed. Having such alternative plans to hand could prove useful.”

• Higher education returned to the fore this week, with the government announcing nearly £1 billion would be slashed from university budgets.

The Higher Education Funding Council for England (HEFCE) announced on Wednesday that £940 million would be axed from university budgets for teaching, research, buildings and other areas – a 9.5 per cent cut. Paul Marshall, director of the 1994 Group, said the cuts would mean a “rough ride” for the economy.

“Consider for a moment the following facts: UK universities generate £60 billion a year for UK economy – that’s more than the agricultural, advertising, pharmaceutical and postal industries. For every one pound spent on them we receive two-pounds fifty back. That’s an excellent return by anybody’s book.

“Cutting their funding will inevitably impact on economic growth, at a time when many other developed and developing competitors are investing highly in their higher education systems. It is a stinging indictment that, Romania aside, we are the only country cutting back funding in vital areas such as universities and research…

“This is the last thing our country needs. The government urgently needs to get out there and talk to those involved in education. Unless it puts on hold its punitive cuts agenda it will undermine the social and economic future of this country. Surely it is better having teachers teaching and young people learning than consigning thousands to the dole.”

And Aaron Porter, president of the National Union of Students (NUS), wrote today on LFF:

“What astounds me is the temerity of [Nick Clegg] using exactly the same rhetoric to justify the rise in tuition fees as he used to oppose it.

“Let’s be clear – the government’s aggressive deficit reduction strategy led to 80 per cent cuts in the teaching budget for universities which led directly to the tripling of tuition fees which will lead directly to the £40,000 plus graduate debts that Nick Clegg said we could not build our future on before the election. The ‘loading up of the credit card’ was the bailing out of the banks and the ‘expecting our kids to pay it off’ is removing up to £4.2 billion from university funding.”

The unknown Egyptian, fighting for his country’s future, fighting for freedom, fighting for democracy, quite literally prepared to lay down his life, fight tooth and nail and die for what he believes in; politics, history, life itself doesn’t get much bigger than this.

The EDL, the BNP-lite of the British far-Right, set to march through Luton tomorrow, where 2,000 police officers will be deployed. EDL leader Tommy Robinson, real name Stephen Yaxley-Lennon, was busy spending the week poisoning the airwaves with various TV appearances, interviewed by Jeremy Paxman on Newsnight on Tuesday and Adam Boulton on Sky News today – interviews in which he repeatedly claimed both himself and his organisation were not racists. The truth, of course, is somewhat different.

Last June, Left Foot Forward reported on Lennon’s thuggish BNP past. He is a former British National Party member jailed for a year for assaulting an off-duty police officer. As Searchlight, the anti-Fascist magazine that investigated him, said:

“The revelation that Robinson had been a member of the BNP explains why so many of the initial EDL activists also attended BNP meetings in the Luton/Bedford area. More importantly, it dispels the myth that the roots of the EDL are not in hard-core racism.

“It destroys the protestations by the EDL leadership that ‘they aren’t the BNP and they aren’t Nazis’, made at their phony press conference held last September in a disused Luton warehouse, where they unfurled a swastika flag and proceeded to try to set it alight for the cameras.”

The latest Horton-Reed analysis for LFF on Tuesday, which again put to the sword the myth peddled by Nick Clegg that the government’s tax policy – this time Lib Dem-led – helps the poorest in society. As they say:

“The Times (£) repeats the Lib Dem mantra that raising the personal allowance is ‘taking the low-paid out of tax’. But it isn’t. The low-paid are currently getting hammered by VAT and a range of other taxes. VAT hits the poorest so much harder than income tax because, while income tax is progressive (the tax burden rises with your income), VAT is regressive.

A point starkly illustrated by this graph, which shows the poorest quintile will be hit hardest by a £3.7bn shift in the burden of taxation from income tax to VAT – nearly ten times harder than the richest quintile.

Leading barrister Aidan O’Neill QC warned the Westminster government it would face compensation claims if it failed to allow prisoners to vote in May’s elections to the devolved bodies.

Scotland: Academics cast doubt over the evidence used by first minister Alex Salmond to support his case for fiscal autonomy for Scotland, with Labour’s Pauline McNeill saying the SNP’s credibility “was deeply damaged by the way it has misrepresented the evidence on fiscal autonomy”. Meanwhile, MSPs rejected plans for a levy on large retailers, with shadow finance secretary Andy Kerr explaining:

“The proposal, in my view, shows a complete ignorance of a very important area of Scottish business – one in nine are employed by the retail sector.”

Wales: The Liberal Democrats urged the Tories to “come clean” on the impact their plans to ring fence the health budget would have on education spending. The party’s education spokeswoman, Jenny Randerson, said:

“The Conservatives are touring the television studios to condemn the Labour-Plaid funding gap when the reality of their proposals is that they would increase the gap up to an eyewatering £881. It is time for the Conservatives to come clean with the Welsh public about what their budget proposals would mean.”

“There is no higher priority for us than ensuring that children and young people whose lives are blighted by poverty have the same life chances and opportunities as their more affluent peers. The strategy we are launching today shows that we are fully committed to doing everything within our powers and using every lever available to us to achieve our aspiration to eradicate child poverty by 2020.”

Northern Ireland: In the week Brian Cowen dissolved the Dail, the first poll of the Irish election suggested Sinn Fein were on course to gain 22 seats. Gerry Adams declared that he would make Sinn Fein “agents for change”.

The Conservative party’s links with the Ulster Unionist Party, meanwhile, came under strain as the Tories established a campaign office in Northern Ireland to field candidates in May’s local elections independently of their UUP allies. In a statement the party explained:

“The party is committed to the development of progressive centre right politics which offer the electorate of Northern Ireland the opportunity to cast their votes for and participate directly with the national government of the United Kingdom.”