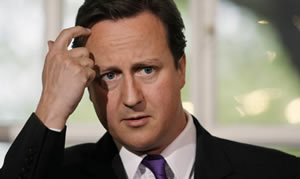 David Cameron’s claims the government’s NHS reforms are backed by a “long list” of organisations looked on extremely shaky ground today, with Downing Street only able to name five organisations they claim to have elicited support from – yet even these groups have serious misgivings. Number 10 told the Mirror the organisations “broadly supportive of the reforms” were the King’s Fund; NHS Alliance; NHS Confederation; Royal College of General Practitioners; and The Nuffield Trust.

However, reports the Mirror…

Chris Ham, of the King’s Fund, has warned that the Tory-led proposals could undermine the benefits of Labour’s health reforms. He said: “The last decade has seen significant progress in the performance of the NHS.

“Ministers are right to stress the need for reform to make it truly world class but these gains are at risk from the combination of the funding squeeze and the speed and scale of the reforms as currently planned.”

NHS Alliance chief executive Michael Sobanja said: “There are many opportunities to improve the NHS and, as expected, there are also risks. Concerns about the details of implementation and timescale need to be carefully considered.”

The NHS Confederation says the reforms are “extraordinarily risky” and could force hospitals to close while Dr Clare Gerada, of the Royal College of General Practitioners, has accused Mr Cameron of removing the “N” from NHS.

And Nuffield Trust director Dr Jennifer Dixon said: “There are clear risks of introducing GP commissioning when the government has placed such a strong emphasis on reducing management costs.”

So who exactly supports those NHS reforms then?

24 Responses to “So, Mr Cameron, who backs your NHS reforms? Erm…”