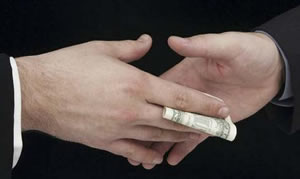 David Taylor is the chair of the Labour Campaign for International Development (LCID; @LabourCID)

One of the last acts of the Labour government was to pass the Bribery Act 2010, which should enable courts to respond more effectively to bribery both at home but also abroad. It was passed with support from all parties, who acknowledged the UK needed to meet its international obligations, particularly under the OECD Anti-Bribery Convention.

Given that the cost of corruption in Africa alone has been estimated at US $148 billion a year, representing 25% of the continent’s GDP, the Act contains important measures to put an end to companies actively fuelling corruption by paying bribes to foreign officials, a practice that undermines development and results in money being wasted.

Back in October, in a highly trailed speech at the LSE, Secretary of State for International Development Andrew Mitchell MP said:

“…let me be clear: this government has a zero tolerance approach to corruption.

“The new Bribery Act, passed earlier this year, puts beyond doubt the fact that bribery of foreign officials and office-holders by UK nationals constitutes corruption, and makes it punishable as such through the British courts.”

Mitchell went on to question why it had taken the previous Labour government so long to implement such an Act before concluding that the Tory-led government:

Fast forward a few months and that 100 per cent support has evaporated at the first sign of resistance from business lobby groups, with the government dragging its feet in implementing legislation that would fulfil the UK’s international commitments and requirements.

On Monday, officials at the Ministry of Justice confirmed that the Act would be delayed beyond the anticipated April 2011 deadline. The official reason given is that the Business Guidance has not been completed, and that business needs three months to make the necessary changes ahead of them being implemented.

But enactment has already been delayed once and media reports suggest the government has caved in to pressure from business, with the new head of the CBI, John Cridland, recently claiming that the act was:

No new concrete date has been set for implementation of the Bribery Act, and there is concern that it may be indefinitely delayed or ‘watered-down’ by vested interests, resulting in nothing more than a tick-box exercise for companies.

Mitchell had good reason to support the Act back in October. Only last week, representatives of development NGOs wrote to the prime minister urging the government to maintain the Bribery Act in an undiluted form and ensure it commences as planned in April 2011, arguing that:

“Our experience has taught us that corruption continues to be one of the biggest obstacles to development, poverty alleviation and good governance.”

The delay in implementing the Act is already said to be testing the patience of others, with the chair of the OECD saying:

“Competitors are getting ready to take robust action against the UK in the light of continued lack of compliance with international law.”

In a strong response to those who have criticised the Act, like the CBI and the Evening Standard – who have argued against the Act on the grounds that it would harm UK competitiveness – Prof. Mark Pieth, who heads the OECD’s working group on bribery in international business transactions, has said that a failure to implement will have the opposite effect:

“This move will hurt the competitiveness of British industry at a moment when it is most vulnerable. Allowing companies to continue to generate business by bribery actually weakens their competitive clout as they become dependent on illegal means.”

“The government is wrong to delay this vital legislation. It should have helped fight corruption which hits developing countries hard. Andrew Mitchell should be demanding this legislation as soon as possible. The government must think again.”

If he fails to take action and stand up for the Act, Mr Mitchell risks undermining his publicly stated “zero tolerance” approach to corruption along with his claim that he will:

“…do everything… use every policy tool at our disposal, bang every head together, if necessary, in our determination to make life better for the world’s poorest.”

22 Responses to “Why is the government delaying the Bribery Act?”