It's official: the alternative vote referendum will go ahead on Thursday, May 5th - exactly 11 weeks from now, reports Shamik Das.

It’s official: the alternative vote referendum will go ahead on Thursday, May 5th – exactly 11 weeks from now. The Parliamentary Voting System and Constituencies Bill finally received Royal Assent last night, paving the way for a referendum on chaging the voting system, with the vote taking place on the same day as elections to the Scottish Parliament, National Assembly for Wales, Northern Ireland Assembly and local elections in 276 councils throughout England.

The Yes campaign were first out of the blocks, unfurling a massive “YES!” banner in Trafalgar Square; the No campaign, meanwhile, were still trotting out their discredited claims about the cost of AV and engaging in yet more scaremongering and negativity.

Tactics best described by David Aaronovitch in The Times (£) this morning, in a piece titled “Horror stories about the proposed voting system are desperate. Not even Scooby-Doo would believe them”:

“…I was reminded of Scooby-Doo when reading Lord Lamont’s eloquent article about AV on these pages on Monday.

“Specifically I recalled the internet Scooby-Doo Plot Generator, in which you press a button and are given a random scenario, such as: ‘Like, there’s an axe-wielding zombie in a rundown castle!’ This simple device strangely applies to many of the arguments made by the No2AV campaign.

“Here is an example: ‘Under AV we would have permanent coalitions and institutionalised breaking of election promises.’ And now the Scooby-Doo version: ‘Like, there’s a snow green witch in an abandoned marina!’…

“‘No’-folk (putting on the scariest mask): the BNP would be more likely to be elected or the election will be determined by the second or third preferences of voters for parties like the British National Party. S-D: ‘Like, there’s a snow green headless pirate witch in an old abandoned museum in a swamp!’

“Again, think about it. Where candidates fall well short of 50 per cent, the most likely source of second-preference votes is from people who have voted for (wait for it) the Conservative, Labour, Lib Dem or nationalist parties. Not only that, but AV makes it less, not more, likely that parties such as the BNP will win seats, for the simple reason that they are unlikely to get a majority or attract transfers.

“So allow me to recapitulate on why some of us think that AV is necessary. Since the 1950s the combined votes for the two main parties have fallen from well over 90 per cent to under 65 per cent. Their memberships have also steadily fallen, as has tribal and class loyalty to them. 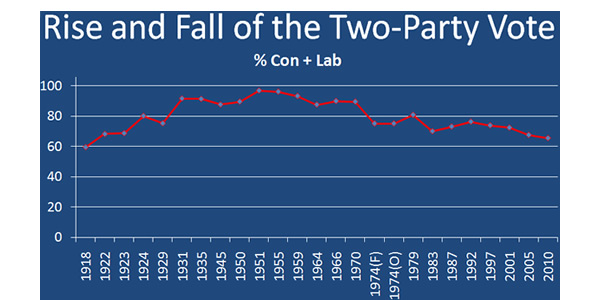 “One result is that our X-marks-the- spot FPTP system has forced massive tactical voting on the electorate in marginal seats (how many of us have received leaflets advising us that “only” Party A can beat Party B so we’d be mad to vote for Party C?). Tactical voting alienates the voter from his or her vote.

“Another result is that though the number of marginal seats where the election is decided is small, the number of seats where the elected MP has received less than half the votes has grown hugely. In the 1950s such minority mandates were 6 per cent of seats. In 2010 it was 66 per cent. AV makes many of these seats properly marginal, taking them out of the “safe” category. In other words, they too have to be worked for.”

While Steve Richards, in The Independent, says that he “cannot see voters rejecting the chance for change in a referendum when the anti-politics mood is so strong”:

“This time, I suspect those who bother to vote, still in a state of anger about MPs’ expenses and now alarmed by the cuts, will take the chance to bring about what will be billed as a “new politics”. Such a move will also place them on the more fashionable side of the argument. Would you prefer to be with Helena Bonham Carter, Colin Firth and Stephen Fry, or Margaret Beckett, John Prescott and Simon Heffer?…

“Some restive Conservative MPs would fume if they lost a first-past-the-post voting system that delivered majority Tory governments like clockwork for much of the last century, and could easily do so again. Managing the Conservative Party would become as much of a priority for Cameron, who would have been on the “losing” side, as keeping the Coalition moving forward has been until now.

“Less important, but not without significance, Lib Dems would have been campaigning on the same side as the Labour leader, Ed Miliband, in a victorious campaign. Central to Miliband’s strategy is a closer relationship with like-minded figures from the Lib Dems and, indeed, the Green Party.”

With Ed Miliband himself writing in today’s Guardian:

“…AV offers an opportunity for political reform, ensuring the voice of the public is heard louder than it has been in the past. And given the standing of politics that is an opportunity we should take. It is a system that combines the direct representation of first-past-the-post with one that will make the votes of more people count.

“We should be in no doubt. If Britain votes yes in May’s referendum it will be a vote to challenge the status quo.

“The very fact of having to gain the majority support of the voters will increase political accountability. AV will also force parties to admit where there is agreement between them, prising open our confrontational system so that similarities sometimes become as important as differences. It could be the beginning of a transformation in political debate.”

In sum, under the current system of first past the post, only a third of MPs elected to Westminster can say they were elected with more than 50 per cent support from the voters in their constituency; under AV, a candidate will have to work to gain the support of the majority vote in order to get elected. Under AV, voters will have a bigger say in who their local MP is.

“Advocates of First Past the Post are at risk of defending a system that no longer works.”