Chris Tarquini examines yesterday's Fabian Society Next Left conference debate on political reform and the 'Democracy Challenge' - where does it go next? 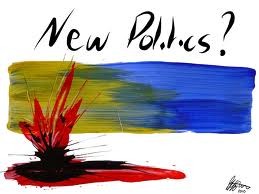 The afternoon session on the ‘Democracy Challenge’ involved a very broad range of topics. The opening question from the chair involved Anthony Barnett and his previous support for the Liberal Democrats at the election. Barnett argued that stopping Gordon Brown and Lord Mandelson was something he was proud of, whilst outlining a future for the progressive movement:

“I’m proud we stopped Mandelson and Brown, it was tragic for the Labour party that they had to be, but they had to be stopped. However, I’m becoming a more vigorous critic of the coalition we now have…

“Clegg has overseen a catastrophe for his party… he’s a Eurocrat. He doesn’t understand democratic politics, his vision comes from Brussels

“There’s a a lot of things we can learn from this process. The new politics has already began, the anti-cuts movement that is student-led includes 16-year-olds who have seen their Education Maintenance Allowance cut, the lecturer who sees cuts to humanities…”

Despite the the initial criticism of Brown and Mandelson, Barnett continued with his agreement regarding Ed Miliband’s earlier call in his keynote speech to:

“…link to progressives wherever they are … we must have a much wider campus.”

Barnett’s criticisms of Labour’s past led John Denham to give a reflective response on the issue, whilst outlining his reasoning behind his support for electoral reform, admitting there were:

Denham justified his support for electoral reform (in contrast to some figures within the Labour party) by explaining FPTP (first past the post) was a system for a time when only two parties mattered, in contrast to an era of greater political choice which is becoming wider all the time. His further reference in support of reform to the House of Lords provoked a response from the Cowley, who questioned Denham on whether the lack of reform on these issues under massive Labour majorities was a ‘missed opportunity’.

The suggestion was accepted by Denham who admitted it was a “huge missed opportunity, the small c conservative culture in our party is still there today”, whilst arguing against opposing the ‘yes’ campaign on electoral reform due to short term political advantages. Denham concluded with one of the central tenets of his argument, the nature of ‘New Politics’ :

“New politics is like a wave on the beach, it changes the shape of the sand, of the beach, but it doesn’t usually replace it straight away”

Denham and Jessica Asato went on to disagree with a question from the audience that asserted that AV gave disproportionate influence to smaller parties. Denham himself admitted “there is no perfect electoral system” and that another way to look at it would be to argue that parties who gained 36 per cent of the vote but a majority of seats could also be seen as a disproportionately powerful small party, a situation FPTP perpetuates.

Denham’s comments correlated with Asato’s argument that the current system actually penalises smaller parties, as well as allowing people to more clearly signal who their preference would be in a coalition. She took the opportunity to mention the TaxPayers’ Alliance’s Matthew Elliot and other former Conservative operatives were at the forefront of the ‘No’ campaign as big business and the right knew that they have the most to lose from the progressive reform.

Lord Wills spoke of England’s dominance in the current parliament, a response which concurred with a lot of the questions presented to him. He went on to explain the argument that an English parliament could undermine the British union whilst admitting ‘thank God’ there was no groundswell of support for the idea, a position that seemed almost universal throughout the audience.

The discussion was a broad and open one, with a large percentage of the time for questions. However the general agreement amongst both the panel and the vast majority of the audience meant it didn’t allow for a vigorous debate. A campaigner against reform may have been able to present a more diverse argument and allow more people to engage in different elements of the conversation.

One audience member fell asleep during the session, which whilst perhaps unfair to provide as representative of what was a useful reaffirmation of the direction of the progressive movement also showed the banality of some of the discussion. It was a useful tool to look at past mistakes and champion a direction for the future, but it lacked the slightly greater excitement and perhaps more constructive elements of some of the morning sessions.

16 Responses to “Where does the reform movement go next?”