Tony Blair will appear before the Iraq Inquiry today for a second time, from 9:30 to 2:00, to face cross-examination on key evidence he gave first time around. 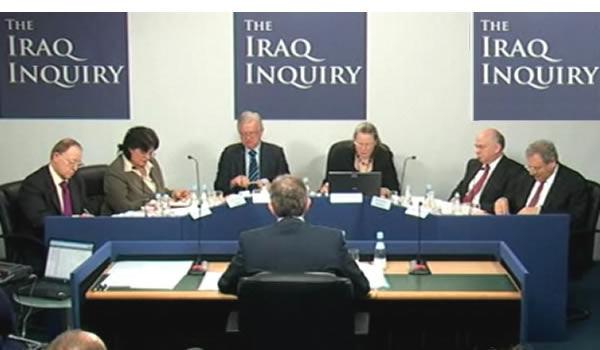 Tony Blair will appear before the Iraq Inquiry today for a second time, from 9:30 to 2:00, to face cross-examination on key evidence he gave first time around and to clear up any gaps and discrepancies.

The Telegraph reports that the inquiry “will look at new evidence about secret deals Mr Blair might have made with President George W. Bush”, with the Financial Times saying Mr Blair “has been served scores of searching and detailed questions ahead of his second appearance at the Iraq inquiry on Friday, in an indication of the more forensic approach expected at the hearing”.

The Inquiry was set up in June 2009, with Terms of Reference to:

“… consider the period from the summer of 2001 to the end of July 2009, embracing the run-up to the conflict in Iraq, the military action and its aftermath. We will therefore be considering the UK’s involvement in Iraq, including the way decisions were made and actions taken, to establish, as accurately as possible, what happened and to identify the lessons that can be learned.

“Those lessons will help ensure that, if we face similar situations in future, the government of the day is best equipped to respond to those situations in the most effective manner in the best interests of the country.”

It is important to remember, however, that:

“The Inquiry is not a court of law. The members of the Committee are not judges, and nobody is on trial. But if the Committee finds that mistakes were made, that there were issues which could have been dealt with better, it will say so.”

Among the key questions the former prime minister will face today, states the FT, are:

• What commitments were given to US president George W. Bush in the build-up to war? Did they go further than Mr Blair’s public statements?

• Why was the attorney-general discouraged from giving legal advice on military action until a late stage? Did Mr Blair properly represent the advice he was given in parliament?

• Did Mr Blair make the grave concerns of UK lawyers clear when agreeing a timeline for war with the White House?

• Did Mr Blair misrepresent to the public the threat posed by Iraq? Was he right to claim the intelligence “established beyond doubt” that Saddam Hussein was producing weapons of mass destruction?

• Why did Mr Blair not act on clear warnings about the lack of post-war planning?

While the BBC suggests the following questions will be put:

• What did Tony Blair say to George W Bush in his confidential notes to the former US President?

• Why did Tony Blair’s public comments about United Nations backing for war in Iraq in early 2003 appear to be at odds with the legal advice from his Attorney General Lord Goldsmith?

• Was there an over-reliance on “fragmentary intelligence” when deciding to go to war?

• Did the British government falsely blame France for the collapse of talks on a second UN resolution in March 2003?

• Why were so few of Tony Blair’s internal meetings on Iraq minuted by Downing Street officials in the build-up to war?

• Having published his memoirs, does Tony Blair have any further personal reflections on Iraq?

“As he prepares for the half-day inquiry session, Mr Blair will be looking over the new evidence gathered since his testimony, which includes some uncomfortable assessments from former colleagues…

“But beyond the detail, Mr Blair will also be considering his tone, and whether a more contrite approach may help defuse some lingering anger.”