Today’s dire GDP numbers show that the government’s reckless gamble with the economy risks plummeting the UK back in to recession, writes Rachel Reeves. 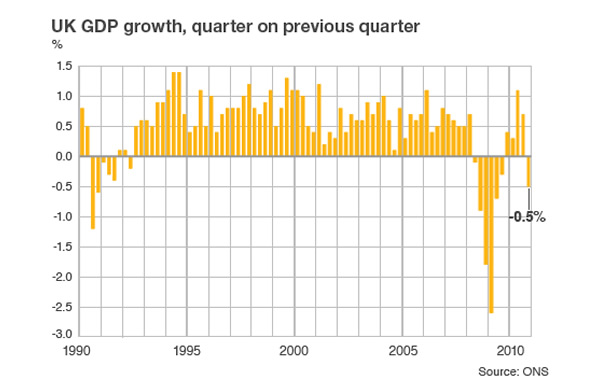 Rachel Reeves is the Member of Parliament for Leeds West

Today’s dire GDP numbers show that the government’s reckless gamble with the economy risks plummeting the UK back in to recession. The economy contracted by 0.5% in the fourth quarter of 2010, compared to growth of 1.1% in the second quarter and 0.7% in the third quarter.

The Chancellor reacted by saying:

“There is no question of changing the plan… on the back of one very cold month…we will not be blown off course by bad weather.”

While Clegg said that it was still:

“… early days of the economic recovery.”

The government’s claims that the numbers are just because of snow is a complacent response that doesn’t do justice to the risk being taken with jobs and growth. For months Labour have argued that the government need a Plan B, that cuts while the recovery is so weak are reckless and that the VAT increase will make matters worse. Today has shown the gamble is not paying off.

The reality is that it’s not all because of the snow. Today’s numbers reveal that even before the VAT increase and before the full extent of the cuts are felt the economy is shrinking again. All the efforts by the previous Labour government to help keep people in work, families in their homes and businesses in business are being undone by what Osborne and the coalition are doing.

The GDP numbers are not even the only data for concern. Last week, unemployment figures showed that 49,000 more people were claiming benefits in the three months to November compared with the three months before that. Mortgage lending is at a 20-year low and bank lending to small businesses fell in the past three months.

So much for cuts and tax hikes allowing the private sector to flourish – the reality is that public sector cuts, before the economy is out of the danger zone will prolong not accelerate the recovery.

And with inflation now at 3.7% on the consumer prices index and 4.8% on the retail prices index, Osborne’s optimism that the Bank of England can keep the show on the road is looking less and less plausible. The competing pressures the Monetary Policy Committee face – of managing relatively high and rising inflation, with stalling demand – is becoming more and more stark.

And it’s not just the MPC who face these competing concerns. On the one hand, families and businesses are worrying about rising prices, but on the other, as they brace themselves for a year of cuts, neither do they want a double whammy of rising interest rates, meaning higher mortgage payments and higher costs of lending.

There are other alarm bells too. Sir Richard Lambert, outgoing head of the CBI, said yesterday that:

“It is not enough just to slam on the spending brakes. Measures that cut spending but killed demand would actually make matters worse.”

He went on to criticise the government for failing to articulate a “vision of what the UK economy might become under its stewardship”.

And on the back of today’s figures, Yorkshire Bank have said:

“It is hard not to draw the conclusion that the underlying momentum in the UK economy is weaker.”

“A return to technical recession cannot be ruled out if the private sector momentum is slipping precariously.”

George Osborne and his Lib Dem cheerleaders are the only ones who seem to think the austerity strategy is working – with a Panglossian attitude that doesn’t match the reality.

Now more than ever there is a need for a genuine alternative to the deep cuts and tax hikes. Along with Ed Miliband, Ed Balls will excel in exposing the gaps in Osborne’s policies, and the risk he poses to families, pensioners and businesses, while setting out Labour’s alternative. People are increasingly crying out for a government on the side of families struggling to make ends meet and policies that help businesses access the finance they need to grow and create jobs.

If the government refuses to rethink and refuses to prioritise growth, trying to explain away rather than confront today’s numbers, Labour must put forward an alternative. An alternative where families and pensioners don’t end up paying the highest price for budget deficit reduction. And an alternative where we re-structure and re-balance the economy so it is less dependent on financial services.

Deficit reduction is not all there is to economic policy, despite what Osborne would have us believe. We need a re-invigorated economy – with jobs across the regions, a greener, fairer and better balanced economy and an economy where those who are working hard and doing the right thing are supported not left to fend for themselves as this government is increasingly doing.

As Ed Balls said this morning:

“It’s not too late – George Osborne and the Treasury must urgently rethink their reckless plan to cut the deficit too far and too fast and start putting growth and jobs first.”

Meanwhile today, Vince Cable cancelled a press conference, and his Growth Strategy promised in the autumn is still nowhere to be seen. And, Osborne has gone from blaming the previous government to blaming the snow, failing to take any responsibility for the worsening economic situation that is of his creation. Last summer Ed Balls called Osborne a “growth-denier” – today that accusation is shown to be increasingly true.

Over the next fortnight data for growth in the US and Europe will be published. If, as expected, their economies are continuing to grow we will have all the evidence we need to know that this reckless gamble with jobs and growth is not working.

If there is to be a spring thaw in the economic numbers, then we need government to quickly get to grips with the economic realities, not stubbornly refusing to recognise the risks that austerity poses even when the data is put before their eyes. It will be up to Ed Miliband and Ed Balls to hold them to account and to put forward an alternative for jobs and growth.