George Osborne tonight attempts to second guess how his opponents will attack him. But his musings reveal far more about the inconsistencies in his own approach than even the sharpist reposte from the new shadow chancellor c0uld manage. 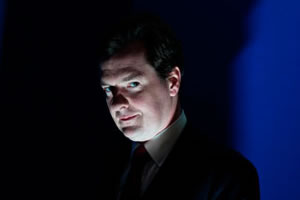 George Osborne tonight attempts to second guess how his opponents will attack him over today’s GDP figures. But his musings reveal far more about the inconsistencies in his own approach than even the sharpist reposte from the new shadow chancellor could manage.

“Deficit deniers or the vested interests who oppose cuts to any item of public spending will probably claim that the Spending Review or the VAT increase are to blame for today’s growth data. But there’s a big problem with that argument – the data refer to the last quarter of 2010 when neither had yet begun.“

While it’s certainly the case that the VAT cut only came into force in early January, the coalition were crowing about making £6.2 billion of cuts in 2010-11 – including to the Child Trust Fund and the school rebuilding programme – only a few months ago. Indeed, in December the Chancellor himself told CNBC:

“We’ve already begun the reductions in public expenditure, and it has not had the impact on demand, not had the impact on economic growth that the critics said it would. So there are plenty of people who said that what we were doing was wrong, but, at the moment, they’re being confounded by the figures.”

So how was Spectator editor, Fraser Nelson, able to claim today that “state spending was up by a staggering 5.2 percent in December year-on-year, and 5.2 percent Q4 2009 vs Q4 2010”. The answer is that state spending can rise even while cuts begin to bite. The rise in spending will partly be due to the costs of recession including increased debt payments as gilt yields rise and larger welfare payments as a result of higher unemployment.  Increases in state spending is entirely consistent with cuts in departmental expenditure limits which in turn have an impact on GDP. The ONS’ statistical bulletin on GDP this morning said:

“Government and other services decreased 0.2 per cent, compared with an increase of 0.6 per cent in the previous quarter.”

Despite all this, Ed Balls has not marched to George Osborne’s tune and instead explained that the lack-lustre growth figures were for the period “before the VAT rise and sharp public spending cuts have even begun”. Note the use of the word “sharp” – the Budget projected £20 billion of additional cuts each year from now until the next election. Instead, Mr Balls walked lock step with outgoing CBI boss Sir Richard Lambert by focusing his criticism on the Government’s lack of a strategy for growth.

George Osborne can’t have it both ways on cuts. He boasted about early action to tackle the deficit despite howls of protest from the economics profession and is now paying the price.