The gaffe-prone No2AV campaign appears to be trying to decontaminate its brand by axing Matthew Elliott as director and installing 2010 Tory PPC Charlotte Vere.

The No2AV campaign have been in touch to inform us that Matthew Elliott remains as campaign director. It was believed that Charlotte Vere had taken over from Elliott after her Twitter profile was changed to “Director of No to AV” and Elliott’s became “Founder and Chief Executive of the TaxPayers’ Alliance in the UK”; see below:

The No2AV website, however, does still list Elliott as campaign director, though in the light of previous events, one could be forgiven for thinking otherwise… 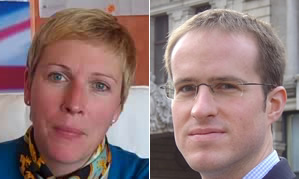 Over Christmas, it was reported that Unite, Britain’s largest trade union with more than two million members, was set to support the No2AV campaign and commit to funding it, described as an “unholy alliance” by The Independent;

In November, Guy Aitchison, in an article on Left Foot Forward, outlined the links between the anti-union TPA and the ‘No’ campaign:

“The No campaign has drawn on the resources of its wealthy backers – people who have most to gain from the status quo – to fund a new video and a series of online ads designed to sow anger and confusion.

“The video asks what are the “burning issues” for you this bonfire weekend, before pointing out that “cuts”, “jobs”, “schools” and “hospitals” are being ignored for a referendum on the Alternative Vote. It is striking how there is zero discussion of the issues raised by electoral reform in the video. Instead, the focus is solely on the alleged cost of the referendum.

“This, then, is how the No campaign will be playing it. With easy populist slogans, designed to spread confusion and exploit popular anger at the cuts. The irony, of course, is that the message comes from a mixture of Tories and TPA luminaries, people who have done more than anyone else to further the government’s cuts agenda.

“And make no mistake, they take the very opposite view of the cuts to the one implied by this video. They know that they have every reason to fear democracy.”

Vere, meanwhile, sparked controversy last year while campaigning in the general election, comparing the Green party with the far-Right British National Party, described by the Green party’s election campaign director as “cheap nonsense” – though it turned out Vere was an ineffective as she was insulting, the Greens’ Caroline Lucas winning the seat of Brighton Pavilion to become the first green MP.

Also during the campaign, it was reported that:

“… At a recent meeting with students from the University of Sussex, Ms. Vere failed to answer many of the questions, simply brushing them off and saying, ‘I’ll get back to you.’

• The referendum on the alternative vote takes place in less than four months’ time, on Thursday, May 5th.

26 Responses to “No2AV campaign distances itself from TaxPayers’ Alliance – or does it?”