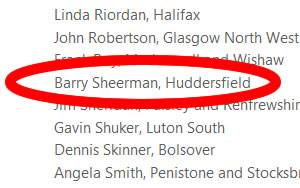 It turns out that the Barry Sheerman gaffe reported earlier today was the No2AV campaign’s second mistake of the year. The original list of “114 Labour MPs” included Alun Michael, Labour MP for Cardiff South and Penarth and former First Secretary of Wales, who is an ardent supporter of AV.

His daughter-in-law, Mary Wimbury, has tweeted:

“Highly amused that my father in law, who unlike me, is true believer in AV was on the no list. Wdn’t trust no ppl to organise voting system!”

To paraphrase Oscar Wilde, “To lose one anti-AV supporter may be regarded as a misfortune; to lose two looks like carelessness.”

And it turns out that two other names on the original list of anti-AV Labour MPs have mysteriously disappeared from the No campaign’s website’s: Ivan Lewis and Albert Owen. Oops!

I have been told that Meg Hillier has also asked to be removed from the NO2AV list bringing to six the total of erroneous No2AV claims.

The Financial Times’ diary today exposes an embarassing gaffe by the No2AV campaign which has wrongly claimed the backing of a Labour MP. It’s not the first time that the group have overplayed their support.

“May’s voting referendum campaign begins with a slip from the NO2AV camp. They named some 100 Labour MPs supposedly backing the current system. One on the list, Huddersfield MP Barry Sheerman, was surprised. He doesn’t back the status quo, and told his local paper he had “never even spoken” to the No campaign.”

The story comes from Sheerman’s local paper, the Huddersfield Examiner, which reported the story on December 31st. Despite the gaffe, Sheerman’s name remains on the No2AV website.

This is not the first time that the ‘No’ campaign has erroneously claimed the support of a Member of Parliament. In November, the BBC reported that:

“Campaigners against changing the Westminster voting system have wrongly included Michael Gove on a list of politicians supporting their cause.

“…they were forced to remove the education secretary’s name after his advisers said he was ‘undecided’.”

With clear arguments against the First-Past-the-Post system that they support and in favour of the AV system they oppose, it’s hardly surprising that the ‘No’ campaign have resorted to inflating their support.

52 Responses to “No2AV campaign start 2011 with another gaffe”