The new economics foundation's senior economist James Meadway delves into today's GDP figures, and asks if the coalition will be forced to rewrite its script. 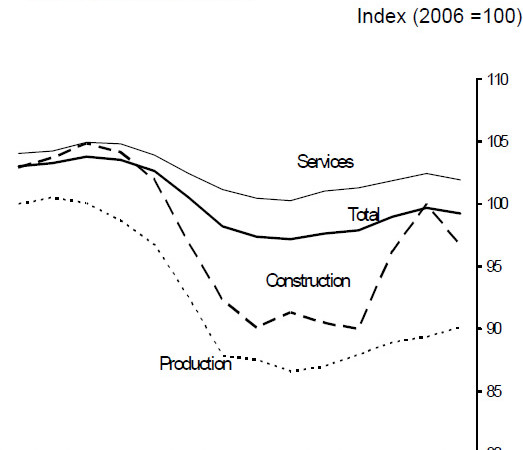 UK Gross Domestic Product contracted 0.5% in the last three months of the year; this wasn’t supposed to happen – the script was helpfully written out by the Office for Budget Responsibility (OBR) last year. The OBR is the new body set up by Chancellor George Osborne, staffed by Treasury officials and based in the Treasury.

It is, of course, independent of the government. The OBR said that Osborne’s plan to dramatically cut public spending would hit the economy – but that this damage would be offset by an equally dramatic recovery in the private sector.

It’s a marvellous story. Our brave young prince sends the big bad ogre of state spending packing. The magic free market fairy waves her wand. Jobs, growth and the good times return. We all live happily ever after. Alas, reality is starting to look less appealing.

Services and construction, between them accounting for more than three-quarters of the economy, all contracted sharply in the last quarter, after zero growth in the one preceding. These new figures are only the results from a single quarter. If you’re feeling optimistic, you can claim that the contraction in the service sector was due to the weather. Snow-bound consumers decided to stay indoors rather than brave the high streets.

But if you are feeling optimistic, you’re in a minority. Households expect to wind down their spending over the next year. Low wages, high inflation, and uncertainty about the future make opening the purse much less appealing.

Whatever effect the snow may have had, the gloom is unlikely to be dispelled as consumers try to lose their own debts. And construction is a disaster area, shrinking by 3.3 per cent. It had been fuelled by big state contracts, like the now-cancelled Building Schools for the Future programme.

The one bright spot is manufacturing, which grew by 1.4 per cent. But at only 13 per cent of the economy, it makes a small contribution to overall growth. A few new private sector jobs here will not undo the damage created elsewhere. Its progress is heavily dependent on a risky export market, driven by the falling value of the pound.

The calition’s pretty tale is beginning to appear decidedly vapid. What’s seriously lacking is exactly as outgoing CBI director Richard Lambert said. The government has “yet to set out its vision of what a successfully growing economy would look like” – it’s done little more than indicate a “few vague ideas”.

A fairy-story does not provide a sense of direction. A lack of direction stokes uncertainty. Uncertainty cripples firms’ and households’ spending. Lambert wants firmer commitments to infrastructure like new airports and motorways. He has the right thought. But locking the UK into high-carbon spending is not going to reduce future uncertainty. A strategy for the economy needs to include policies to sustain decent, green jobs and deliver social justice. Managing without any strategy is a recipe for disaster.

The economy isn’t sticking to the script. Will the coalition be forced to do a rewrite?

20 Responses to “Will Osborne be forced to rewrite his script?”