Shamik Das reports on Labour's comprehensive victory in the Oldham East and Saddleworth by-election, plus the rest of the week's political news. 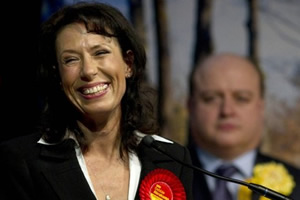 • Ed Miliband described Labour’s by-election win in Oldham last night as “the first step in a long journey for Labour”. He also said the public had “sent a very clear message to the government about some of the things they’ve been doing, the rise in VAT, the trebling of tuition fees and the police cuts” and that he hoped “the government will listen to what they’ve said about those key issues”.

The by-election was caused by the disbarring of Phil Woolas, found guilty of spreading lies against his Liberal Democrat opponent. Many questions have arisen as a result of the by-election, with particular emphasis on the impact of the poll on the Lib Dems’ prospects for the next election; to help answer these questions, try out the Next Left/Left Foot Forward Liberal Democrats General Election Predictor – for instructions on how to use it see here.

• Constitutional reform was back on the agenda this week. On Wednesday, Left Foot Forward revealed that the Parliamentary Voting System and Constituency Bill could be decoupled in a bid to ensure the AV referendum goes ahead in May. Marcus Roberts reported that “with only three meetings of the committee scheduled before the February 17th deadline for Royal Assent, peers are concerned that given their responsibility to revise and scrutinise legislation time has run out to complete full scrutiny of the bill as it stands”.

“The AV segment, having already been passed by the Lords, could then proceed back to the Commons for a final vote before Royal Assent, whilst the constuency boundary changes legislation could continue later in the session or be rescheduled for a future session.”

Roberts wrote on the subject again yesterday – about the risk of it becoming a “constitutional car crash” – with the papers finally catching up with the story today; the Guardian, Telegraph and Mail all reported the news, while the FT’s Jim Pickard wrote:

“Ministers are growing increasingly anxious because the relevant bill – covering both AV and reform of constituency boundaries – is currently marooned on the eighth day of its committee stage in the House of Lords… Amid a tightly-packed parliamentary schedule, the bill may struggle to become law by the critical point of February 16 – in 12 parliamentary working day’s time.

“This date is crucial because under the law the Electoral Commission needs a full 10 weeks to prepare the literature for the referendum, including its precise wording… One possibility is that there could be a vote in the Commons to amend the Political Parties, Elections and Referendums Act of 2000 – the basis for the 10-week timescale – to shorten it by several weeks.”

• The major international story this week was the attempted assassination of a member of Congress in Arizona last weekend. Gabrielle Giffords, who is still in a critical condition in hospital, was gunned down in an attack in Tucson on Saturday, an attack in which six people were killed. Speaking for many, Arizona Sheriff Clarence Dupnik hit out at “the vitriol that comes out of certain mouths about tearing down the government” which may have inspired the gunman to carry out his attack.

One of those shrill voices spewing vitriol of which Dupnik spoke is Sarah Palin, who last year placed Congresswoman Giffords on a ‘target list’ of lawmakers she wanted to depose – each represented by a pair of crosshairs; at the time, she screeched: “If the vote failed, don’t retreat – RELOAD.” Sadly, however, the calls for the US hard-Right to tone down their rhetoric appear to have fallen on deaf ears, Palin issuing a video in which she spoke about “blood libel“. In. Credible.

Lord Oakeshott, the senior Liberal Democrat peer, who described bankers’ bonuses as a “moment of truth” for the coalition. Reiterating Nick Clegg’s earlier words that the Lib Dems “won’t stand idly by”, he told Newsnight: “This is a real moment of truth for the coalition on fairness. We can’t have a bonus bonanza in the age of austerity.”

Whether or not the Lib Dems will be able to exert any influence in this policy area, however, is anyone’s guess. As Rachel Reeves MP, writing on Left Foot Forward, pointed out: “With the new year being defined by this inaction [on bonuses], I fear that expecting the Tory-led government to regulate bonuses ‘robustly’ is a little too much like thinking that turkeys might vote for Christmas. The banks have been let off.”

Brian Coleman, Tory chair of the London Fire Authority, who described Fire Brigade Union members as “thick”, said “we have to break the FBU” and talked about permanently removing fire engines. Darren Johnson AM, Green party London Assembly Member, writing on Left Foot Forward, said his actions “suggest that an amicable settlement is the last thing he wants”.

Coleman is reported to be paid more than £100,000 a year. An Evening Standard investigation found that Coleman claimed £2,275 travel expenses for eight months in his role as chairman of the London Fire and Emergency Planning Authority and also ran up a taxi bill of £8,231 in his position as Assembly Member for Barnet and Camden – including a £656 bill on one day.

Research into the Liberal Democrat tax threshold policy by the Resolution Foundation, which underlined the meagreness of the Lib Dems’ flagship policy. To view a graph of how individual tax and benefit changes due this year will impact a normal family, see here.

Will Straw described the policy as “an expensive and regressive way to target help at the lowest paid”, while Channel Four News’s economics editor Faisal Islam tweeted:

Scotland: In the week Ed Miliband clashed with David Cameron over excessive bankers’ bonuses, the Lib Dem Leader at Holyrood Tavish Scott called on the coalition to do all it could to stop big bonuses: “I just don’t think anyone at the moment would accept the idea of bankers at the banks that caused the economic problems we are all suffering from paying themselves big bonuses.”

Meanwhile, an Oxford academic who advised the Calman Commission, Iain McLean, warned the SNP that opposing the Scotland Bill would be “pointless” and would damage the SNP at the polls. The bill, he told MSPs, contains “quite generous, no detriment guarantees” to protect the Scottish Parliament’s Budget against major changes in tax revenue.

Wales: Following meetings with Lib Dem Chief Secretary to the Treasury Danny Alexander, Welsh finance minister Jane Hutt suggested the coalition might now be open to discussing reforming the Barnett Formula which the Holtham Commission said significantly underfunds Wales. She said: “The Chief Secretary has confirmed that the UK government will consider the Holtham Commission’s proposals with us after the referendum.”

Meanwhile, the Archibishop of Wales, Barry Morgan, used a speech this week to call for the establishment of an ethical business code to improve the operation of the corporate world:

“To talk about ethics means talking about how we should live our lives and the kind of people we ought to be and the way we would like our communities to function. In the context of business this used to be regarded as irrelevant, pious or even weak. It was not seen as ‘businesslike’ in a world where competition ruled and financial growth was the only marker of success.

“However, we are now coming to realise that every time we make a choice or take a decision we are reflecting our personal values and commitments, indicating the kinds of people we are and the way in which we organise our lives.”

Northern Ireland: The Ulster Unionist deputy Mayor of North Down, Harry Dunlop, defected to the Democratic Unionist Party, complaining that the the Tories’ partners in Northern Ireland, the UUP, no longer properly represented unionism. He said: “Recent debacles such as forcing Lady Hermon out have shown that the party is going in a different direction from the community as a whole. I want to work to make the community a better place: it is clear to me that I can best do that as part of a strong united DUP team in North Down.”

“My first task as Green party leader will be to put to bed the myth that the Green party is a single issue party. While we were born out of the environmental movement our aim has never been to put environmental concerns above all others.

“The Green party wants to see all political decisions based on whether they are good for the economy, good for people and good for the environment.”

Who is the most progressive politician in Britain today? How do organisations like the NHS and BBC compare? We want to hear your voice and who you consider progressive today; please answer our survey to make sure we know your opinion – the results will be shared on the website next week.