Shamik Das reports on the jailing of Former Labour MP David Chaytor for 18 months for expenses fraud, plus the rest of the week's political news. 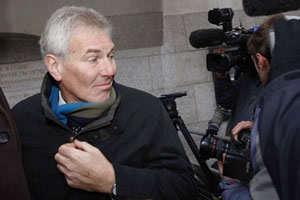 “These false claims were made in breach of the high degree of trust placed in MPs to only make legitimate claims. These offences have wider and more important consequences than is to be found in other breach of trust cases. That is the effect they have had and will have in the confidence the public has in politicians.”

The MP for Barnsley Central Eric Illsley, who has been suspended from the Labour party, stands trial next week accused of dishonestly claiming £20,000 in council tax and other bills on his second home, while former Labour MPs Elliot Morley and Jim Devine and the Tory peers Lord Hanningfield and Lord Taylor face trials later this year.

• The tuition fees row resurfaced this week, with Nick Clegg claiming the trebling of fees was “progressive”. It cut little ice, however. Writing on Left Foot Forward, general secretary of the University and College Union Sally Hunt said:

“Nick Clegg can bandy the word progressive around all he likes, but the general public are not stupid. This week we have seen a record number of applications to university as people try to get in before his ‘progressive’ system of tripling fees and increasing debt.”

Simon Hughes, meanwhile, was appointed the government’s ‘Advocate for Access to Education’, tasked with the huge responsibility of ensuring fair access to universities. Writing on Left Foot Forward, president of the National Union of Students Aaron Porter welcomed the creation of the role, and pledged to work with Mr Hughes:

“Facing the difficult circumstances we are presented with Simon Hughes now has a vital role in protecting university education and the hopes and ambitions of a generation.

“His record so far has not been good – letting his constituents down by abstaining on the vote setting an example for other abstentions and allowing the bill to pass – but he has always spoken of the importance of ensuring fair access even whilst speaking about the plans to raise tuition fees, so I believe we can work constructively with him on this matter.”

Porter also wrote an open letter outlining a series of recommendations for Mr Hughes, which included the reinstatement of the AimHigher scheme and the Education Maintenance Allowance, clarification of the government’s ‘National Scholarship Scheme’ and urging him to ensure the coalition kept its promise that only in ‘exceptional circumstances’ would universities be allowed to raise fees above £6,000.

• A week before the Oldham by-election, the Liberal Democrats hit new lows in the polls. This morning’s YouGov daily tracker had them on just 7 per cent – their lowest rating in any national poll for more than 20 years. Labour are on 43 per cent and the Conservatives 39 per cent, with the government’s net approval rating down at -20.

More worrying for Nick Clegg’s party will be The Independent’s poll of polls, published on Wednesday, which collated data from ComRes, ICM, Ipsos Mori and YouGov, and had the Lib Dems down on 11 per cent, with Labour on 40 per cent and the Conservatives on 38 per cent. If repeated at a general election, this would see the Lib Dems reduced to just 15 MPs, with Labour returned to power with a majority of 14.

Nick Clegg, who today delivered a key note speech on civil liberties, in which he pledged to reform Labour’s controversial policy of control orders, saying:

“Control orders cannot continue in their present form. They must be replaced… We will introduce a system that is more proportionate, in line with our long-held commitment to due process and civil liberties that seeks to disrupt and impede would-be terrorists from carrying out their heinous crimes, and that continues to focus on bringing terrorists to justice… I don’t think it’s justifiable to impose what is virtual house arrest without being able to charge and commit someone first.”

The day before, Mr Clegg used an interview in the Daily Mail to signal an extension of freedom of information laws, saying it was a “fundamental right” of citizens to hold the government to account, and that if an organisation’s actions had “clear consequences for the public good, people must be able to see right into the heart of them”. Even though the announcements were nothing new, as Left Foot Forward reported, they are welcome nonetheless, as is his speech today, which, as Michael Harris wrote on LFF today, may force Labour to rethink its attitude to civil liberties.

The Daily Mail and The Daily Telegraph, who pulled 38 Degrees’s anti-tax-dodging advert featuring George Osborne, which asks if he is “the dodgiest dodger of them all”. As Left Foot Forward reported on Tuesday, both papers had agreed prices with the group, but upon seeing the ad, the Telegraph said a flat no while the Mail upped their quote significantly. The Mail, however, did agree to place the ad in Metro – yet it was spiked at the last minute.

As Left Foot Forward has previously reported, the Chancellor’s family has set up offshore trusts, one of the most common ways for the super rich to avoid paying inheritance tax, and that, put simply, there will be no inheritance tax to pay on the death of his father – a saving of up to £1.6m.

Will Straw’s article yesterday on the exposing of the Tory “deceit” on debt, following a piece by Ed Miliband in that morning’s Times (£). Will wrote:

“The Tories were committed to sticking to Labour’s spending plans until after the collapse of Lehman Brothers on September 15th, 2008. As this graph shows, it was only as tax revenue fell through the floor and ‘automatic stabilisers’ – like unemployment benefits and increased tax credits – kicked in that the deficit opened up.

“Prior to that point, the modest Public Sector Borrowing Requirement (PSBR) was due almost entirely to capital spending – entirely acceptable under the old fiscal rules.”

While of the Lib Dems, Will wrote:

“Going into May 2010, the Lib Dems supported Labour’s spending plans (although that didn’t stop some of their candidates distorting the facts on debt). The Lib Dems only diverged from Labour’s fiscal policy at some point after they first sniffed the scent of power in that dramatic weekend in May. Yet by August they’d completely forgotten their pre-election policy with Chris Huhne taking the Tory line…

“Understanding the truth about the deficit is critical to understanding the right response. Rhetoric about a ‘debt crisis’ only raises expectations for calamitous policies like the rapid cuts to public services or the ideological rise in VAT which was only necessary to pay for tax cuts to corporation tax, council tax, national insurance, and income tax. Don’t be fooled.”

“During the Christmas break, I had the opportunity to read ‘Crisis and Recovery: Ethics, Economy and Justice’ by Rowan Williams and Larry Elliot, who make the point that the financial crisis is about much more than money.

“As they say: ‘It is also about morality, casting an uncomfortable light on the links between the activities of bankers and the well-being of society as a whole. The idea that economics is morally neutral or that finance should be above ethical scrutiny deserves to be challenged.'”

Scotland: The SNP called on the Commons defence select committee to undertake an inquiry into the impact of defence cuts on Scotland. Writing to the committee’s chair, the SNP’s Westminster leader Angus Robertson explained:

“Scotland has endured mammoth defence cuts over the last decade, and all the evidence surrounding the SDSR suggests that the Ministry of Defence is set to continue the trend of concentrating defence manpower, basing and spending in the south of England. Scotland has seen a severe defence shortfall and contraction which cannot continue.”

Meanwhile, Conservative Scotland Office minister David Mundell was struck by a pie by protesting students as he attended a cheese and wine event for Conservatives at St Andrew’s.

Northern Ireland: Northern Ireland Water’s chief executive Laurence MacKenzie stepped down following the fiasco which saw many households without water after water pipes burst in the wake of the ice-cold weather. In a statement, he explained: “This is entirely my own decision. I believe firmly in the principles of responsibility and accountability; it is for that fundamental reason I have decided to pursue this course of action.”

It came as opposition parties tabled a motion of no confidence in Sinn Fein’s regional development minister, Conor Murphy, over his handling of the situation. The Orange Order, meanwhile, ruled out talks with Sinn Fein and the Parades Commission.

The Netroots UK conference takes place in central London tomorrow, bringing together hundreds of grassroots activists for a day of workshops, discussions and networking activity. Tickets have sold out, so if you aren’t coming, do tune in to Left Foot Forward as we we will be providing full live coverage of the conference all day tomorrow.

The following weekend, on Saturday January 15th, Ed Miliband will be the keynote speaker at the Fabian Society New Year Conference; tickets are selling fast – to make sure you don’t miss out, buy here.