The Oldham East & Saddleworth by-election seems to have created many questions; to help answer them we present the Liberal Democrats General Election Predictor. 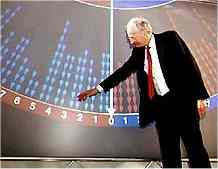 The Oldham East and Saddleworth by-election seems to have created as many questions as it has answered. As Labour rise, Conservatives fall, and the Liberal Democrats keep steady, one explanation may be that Liberal Democrat voters have defected to Labour only to be replaced by tactically-voting Tories. But would this pattern be repeated around the country in a general election? And, if so, what effect would this have for Liberal Democrat MPs hoping to hold on to their seats?

The model (powered largely by the psephological/excel genius of my colleague John Emerson) will calculate how many seats the Lib Dems will hold based on your individual predictions as to the Lib Dems’ national vote share, what overall arrangement they will have with the Conservatives at the next general election and how much pro-Lib Dem MP voting from Tory voters occurs.

There are three scenarios that sum up the likely Lib Dem/Conservative strategic options come the next general election:

1) A formal pact: Lib Dems and Tories agree not to contest those seats where their coalition partner has a greater chance of winning;

2) Oldham East and Saddleworth-style de facto non-aggression pact: Each party fields candidates in all seats but does not actively contest those seats in which their coalition partner has a greater chance of winning. This means that spending, A-list candidate selection and cabinet visits will all be reduced;

3) Every-man-for-himself: The Lib Dems and the Tories vigorously contest all seats against each other even if by so doing they risk splitting the anti-Labour/pro-government vote.

Personally, my best guess is that the Lib Dems will improve from their current polling average of 9% (and also because if they stay on 9% you don’t need a model to tell you they’ll be wiped out), fighting their way back to the heady heights of their 1992 showing of 17.8% – but will still be down from their 2010 showing of 23.5%, which delivered 56 Lib Dem MPs.

I also believe there will be an informal Tory/Lib Dem non-aggression pact which delivers 20% of the Tory vote to the Lib Dems in those seats currently held by a Lib Dem MP, with 60% of the remaining 2010 Lib Dem vote, I anticipate, going to Labour. The result of this scenario is a loss of 32 Lib Dem seats including such leading Lib Dems like Chris Huhne, the Energy and Climate Change Secretary, Michael Moore, the Scottish Secretary, and schools minister Sarah Teather.

The likely response of such an analysis may well be that Liberal Democrats at the constituency level will opt for a hyper-local approach that seeks to detach to a large extent from the national Liberal Democrat situation. In this way, individual MPs will try to escape from the ‘tyranny of the poll rating’ but may well also increasingly take an individual, rather than a collective, perspective on major policy choices facing the party and government of which it is part.

Such an approach would of course be a throwback to the traditional Lib Dem model of local autonomy, resulting in a marked differentiation of policy and politics from region to region. Though it would be somewhat more novel for a party of government.

Readers are now invited to use the model and offer feedback on how it might be improved.

How to use the model:

1) The only cells that you should adjust are the yellow highlighted cells;

2) Enter what % of the vote nationally you think the Lib Dems will achieve (cell B2);

4) Enter which coalition scenario (either 1, 2 or 3) you think will occur (cell B3). Scenario 1 is a formal pact; scenario 2 is an Oldham East and Saddleworth-style de facto non-aggression pact; and an every-man-for-himself scenario is number 3;

5) Enter what percentage you think the Lib Dems would gain from the Tories in each scenario. A formal pact is scenario 1 (cell H2), a de facto non-aggression pact is scenario 2 (cell H3) and an every-man-for-himself scenario is number 3 (cell H4). For example, if you think that at the next general election, Lib Dems and the Tories are likely to co-operate informally and that Tory voters are likely to give their support to Lib Dem candidates where there is a sitting Lib Dem MP then you would select scenario 2;

6) You now decide what value that Tory tactical support is. For instance, if you think that as many as 1 in 4 Tory voters would opt for the Lib Dem MP then you would express that as 25% in cell H2. Note: you do not have to enter percentages for the other scenarios that you have not opted for;

7) The results in terms of Lib Dem losses and holds are then shown on a seat-by-seat basis down column O and summarised in cells N2 and N3.

The assumptions of the model are as follows: At the next General Election:

• The Lib Dems will receive fewer rather than more votes;

• The next general election will take place under First Past the Post;

• The next general election will take place under 2010 constituency boundaries and electorate sizes.

Other versions of the model may be developed later.

Caveats: The model is a work in progress and feedback is most welcome. Some of its initial needs include:

And much more besides! Thoughts on how to best express these variables, constructive criticism of the model thus far and suggestions for improvement would be much welcome. In the meantime, happy modelling!