53 per cent of the public believe the economy will worsen over the course of the next year - with only a quarter confident it will improve, according a new poll.

Fifty three per cent of the public believe the economy will worsen over the course of the next year – with only a quarter confident it will improve, according to the January’s Ipsos MORI Political Monitor. The headline voting intention figures reveal more bad news for the Conservatives, showing them down five points on 33 per cent, with Labour up four on 43 per cent and the Liberal Democrats up two on 13 per cent.

There was slightly better news for the government from people’s long term view of how the economy will fare, with 49 per cent agreeing that, eventually, their policies will improve the state of Britain’s economy – up one point since October – against 43 per cent who say the opposite.

The net long term confidence index, however, fell to just +6, continuing the downward trend since the election; in June, the figure stood at +32, in September it was +21, and in October it was +9.

When it comes to the party leaders, Ed Miliband has the highest net satisfaction rating, at 0, with David Cameron’s net satisfaction rating -14 and Nick Clegg’s -23, while among their own supporters, the prime minister is the most popular, on +65, followed by the Leader of the Opposition on +36 and the deputy prime minister on only +9 – just 48% of Liberal Democrat supporters are satisfied with him, against 39% who are dissatisfied. 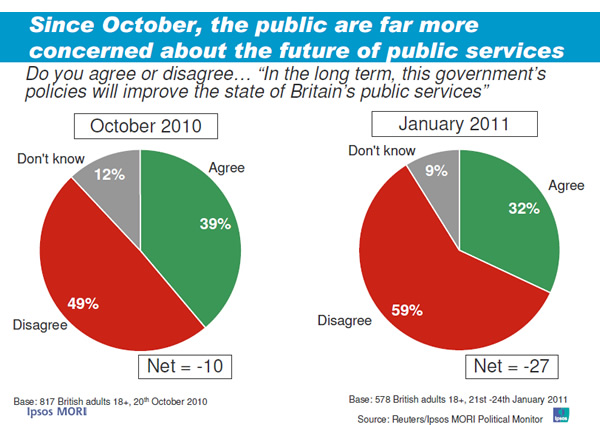 • Ipsos MORI interviewed 1,162 adults across the country by telephone from January 21 to 24; the data was weighted. All the charts can be viewed here.

10 Responses to “Poll: Majority believe economy will worsen over next 12 months”