Iain Duncan Smith has once again mislead the House of Commons. He was forced to correct the record on housing benefit statistics. 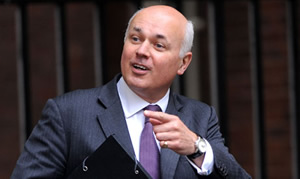 In a Parliamentary Answer to Karen Buck MP on January 10th, Iain Duncan Smith made the following claim:

“What we are doing is to make sure that we reduce the ballooning cost of, for example, housing benefit that she left behind-a bill that doubled in the past five years.”

But following a letter from his opposite number, Douglas Alexander, the work and pensions secretary has been forced to correct the record and set himself straight:

“What we are doing is to make sure that we reduce the ballooning cost of, for example, housing benefit that she left behind-a bill that doubled in the past ten years.”

Mr Duncan Smith made precisely the same mistake in November – alongside two other errors – and was forced to correct the record. Meanwhile, the UK Statistics Augtority pointed to “serious deficiencies” in his department’s use of statistics.

Mr Duncan Smith, of course, neglected to mention that the doubling of the housing benefit budget over 10 years is largely explained by the impact of the recession since more people have become out of work or ended up on low pay. The letter to IDS pointed to statements on part time working and the Future Jobs Fund which were, according to Mr Alexander, “subject to considerable doubt”.