More than 2,000 young people from across the country, including from the Prime Minister's own constituency of Witney in Oxfordshire, have signed a letter to David Cameron to be published today, calling for the government to think again on its planned cuts to youth provision and support. 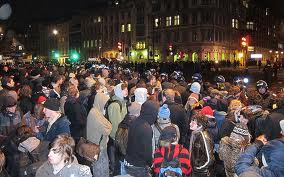 More than 2,000 young people from across the country, including from the Prime Minister’s own constituency of Witney in Oxfordshire, have signed a letter to the David Cameron to be published today, calling for the government to think again on its planned cuts to youth provision and support.

David Willets, the Minister for Universities and Science, has written in his book ‘The Pinch‘,  about how those generations coming after the ‘baby-boomers’ – those born between 1945 and 1960 – have faced a raw deal as the post-war cohort used their demographic and democratic muscle to swallow up resources.

However, his government appears intent on continuing the process, as the scale of the planned retrenchment in children and young people’s services comes into view. As detailed by the National Council for Voluntary Youth Services report in December, planned cuts or withdrawals of support from central government include:

• The abolition of the Educational Maintenance Allowance, worth £30 per week to 645,000 young people aged 16-18 years-old who remain in education. An Institute of Fiscal Studies (IFS) report suggests that “the costs of the EMA were likely to be exceeded in the long run by the higher wages that its recipients would go on to enjoy in the future”;

• The withdrawal of the AimHigher programme, targetted at encouraging those from deprived backgrounds to apply for university through residential summer schools, master-classes, open days and mentoring schemes;

• The cancellation of a further £290million investment in the Future Jobs Fund (FJF). The FJF was a response to recent high youth unemployment, which was as high as 20 per cent in December, costing the UK economy £155million per week.

The original £1billion pot for the FJF was intended to create 150,000 new jobs, including 100,000 for 18-24 year-olds. It has been praised by Barnado’s, Action for Children, and youth charity Catch-22 who said it has provided: “significant benefits for young people from which they have gained new skills and experience to help them find long term sustainable, fulfilling, and appropriate employment”;

• The FJF was part of a wider young persons’ guarantee, which promised all 18-24 year-olds a job offer, work experience or six months of training, which was projected to be worth £450 million in 2011/12.

Although the guarantee is due to be replaced by a ‘Work Programme’, by the coalition, concern about the new scheme has been voiced by Fairbiridge, the charity for hard-to-reach disadvantaged young people as being unsuitable for the most disengaged children. Meanwhile v, the National Young Volunteers Service, have said that “there is a risk there will be a gap in provision for young unemployed people to gain valuable work experience before the new work prgramme and apprenticeship opportunities come on board”;

• The IFS have suggested that coalition’s welfare reform measures, including introduction of the Universal Credit, will “act to increase poverty among these groups [children and working-age adults] slightly in 2012-13, and more clearly in 2013-14” including a rise in relative poverty of 200,000 children, and absolute poverty of 400,000 children;

• Reform to housing benefit, including the planned cut of 10% in jobseekers’ allowance to anyone who has been unemployed for one year, even if they have fulfilled all demands made of them, which has alarmed the charity CentrePoint.

These do not include the ‘hidden cuts’ which will come through local government, to Sure Start, Connexions and the Working Neighbourhoods Fund among other programmes. The letter, addressed to the prime minister and chancellor, asks the coalition:

“Why are young people being targeted so heavily?  We are criticised for hanging out on street corners, portrayed as anti-social, trouble-makers by the media. Yet the very centres that give us a place to go, keep us safe and provide us with the guidance we need to make the right choices, are being wiped out. The cost of jailing one young offender is up to £100,000 a year, but current spending that helps keep young people out of trouble is just £100 a year, per person.

“Britain’s youth service is admired throughout the world. Its public funding and partnership with voluntary organisations and well trained, professional youth workers make it a model to be proud of. Did you know that every one pound invested in youth work generates £8 worth of voluntary activity? This is your ‘Big Society’ in action. Please do not let it be destroyed.”

“Short-term savings have long-term consequences – especially those directly impacting on young people. Youth workers, volunteers and special projects do a fantastic job in supporting young people to make a transition to adulthood, adding value to our communities and preparing young people for the world of work and family.

“At a time of disproportionate youth unemployment, rising debt we really need to be careful of the consequences of rushing to irrevocably dismantle community support services for young people.”