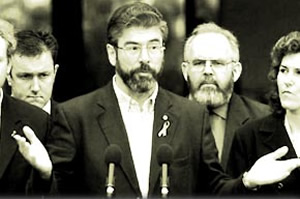 The contrasts between David Cameron and Gerry Adams could not be more stark. While Cameron was sitting his A-Levels at Eton, Gerry Adams assumed the presidency of Sinn Fein – after spending is own youth locked in guerrilla war with the British state. In order to lead Sinn Fein’s campaign in the forthcoming general election in the Republic, Adams is standing for the Dail in the Louth constituency. Relinquishing his West Belfast Westminster seat, however, has triggered a frisson of excitement among parliamentary anoraks at the manner of his departure.

As is well known, Sinn Fein Members elect not to sit in the House of Commons due to their refusal to swear the oath of allegiance to the British Crown (and also because they regard it as a ‘foreign’ parliament).

Members retiring their seats between elections are, however, obliged, under archaic parliamentary tradition, to apply for an Office of Profit under The Crown before they can stand down.

“I’m not sure that Gerry Adams will be delighted to be Baron of the Manor of Northstead. But nonetheless I’m pleased that tradition has been maintained.”

But it appears that Adams – who neither sought nor accepts the antiquated title – has had the last laugh. Last night the Speaker’s office confirmed that Adams has now been disqualified as a Member of Parliament, as per his original intention. Meanwhile Adams claims that the prime minister’s private secretary apologised to him for David Cameron’s point-scoring.

“The only contact I have had with the British Parliament is a letter I posted to them last Thursday.

‘A chara [equivalent of “Dear Sir”), I hereby resign as MP for the constituency of west Belfast. Go raibh maith agat [thank-you very much]. Gerry Adams.’

“When I was told of the British Prime Minister’s remarks today this was the first I heard of this development. I understand Mr. Cameron has claimed that ‘The Honourable Member for West Belfast has accepted an office for profit under the Crown.”

“This is untrue. I simply resigned. I was not consulted nor was I asked to accept such an office. I am an Irish republican. I have had no truck whatsoever with these antiquated and quite bizarre aspects of the British parliamentary system.

“I am proud to have represented the people of West Belfast for almost three decades and to have done so without pledging allegiance to the English Queen or accepting British parliamentary claims to jurisdiction in my country.

“Mr. Cameron’s announcement that I have become Crown Steward and Bailiff of the Manor of Northstead, wherever that is, is a bizarre development. I am sure the burghers of that Manor are as bemused as me. I have spoken to the Prime Minister’s private secretary today and he has apologised for today’s events.”

With Sinn Fein polling strongly south of the border – tying for third place with governing party Fianna Fail – the prospect of Mr Adams’s party making an historic breakthrough and emerging as part of the government in both parts of the island of Ireland is now a real possibility.

Perhaps his sneering schoolboy critics will shortly wish he had stayed where he was.