Better regulation of the media - holding them to account like public servants are - was one of the ideas discussed at the Dragons Den session at the Fabian conference. 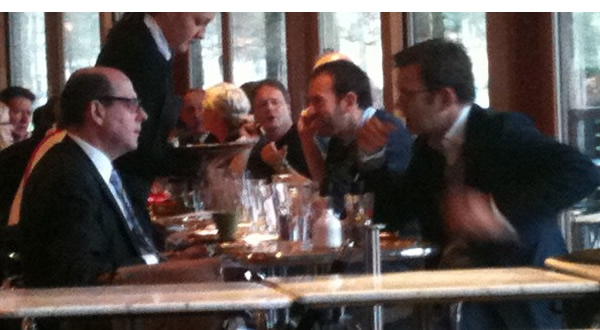 A £7 billion windfall tax on banks to fund social housing was voted the most radical idea for the future by delegates at yesterday’s Fabian Society Next Left conference. Emma Burnell’s idea beat proposals for greater accountability for the media – submitted by Left Foot Forward contributor Claire French; a plan to “stop all the cuts now” by offering the Lib Dems “whatever they wanted”; Maurice Glasman’s baffling plans for reforming the City of London; and Sunder Katwala’s proposal of levying a 20 per cent tax on private school fees to fund a new, genuinely aspirational pupil premium.

The judges on the ‘Dragons Den’ style panel were Mehdi Hasan, Senior Editor (Politics) at the New Statesman; Sadiq Khan MP, Chair of the Fabian Society; pollster Deborah Mattinson; and Telegraph columnist Mary Riddell. Though it failed to win, French’s proposal, centring on better regulation of the media, holding them to account the same way public servants are – for example by publishing journalists’ expenses – was widely thought of as the best presented and easiest to understand.

At present, the Register of Lobby Journalists’ Interests, for example, only publishes journalists’ “other relevant gainful occupation” (with no figures) – falling well short of the extensive Register of Members’ Financial Interests or the Ministerial and SPAD travel, gifts and hospitality lists. Though inextensive, the lobby register does reveal just how many pies the BBC’s Daily Politics and This Week anchor Andrew Neil has his finger in:

(Entry added on 13 January 2010 under the procedure set out on page 2 of the Register).

The media would be made more accountable, the conference was told, were journalists and executives of a certain rank made to register all gifts received from and meetings held with the likes of David Cameron’s communications chief Andy Coulson, pictured above having lunch with the BBC’s Political Editor Nick Robinson.

Journalists couldn’t have it both ways, said Riddell:

There was broad consensus amongst the judges and delegates that there needed to be much more effective regulation of the media, putting them in line with doctors, lawyers and accountants. Although “Robinson and Coulson deserve each other”, Mehdi argued that:

“We need an OFCOM system for newspapers so we don’t have the Daily Express publishing horrible racist Islamophobic lies on their front page almost every day.”

“I’m not in favour of it but I do have sympathy for the idea; as scummy and terrible as they are, there is huge argument for a free and fair press. We already have very strong libel laws – we tamper with our free press at our peril.”

“It’s difficult – no one would talk to journos if you bind a journalist’s hands. The Lib Dems are right to complain to the PCC about the Daily Telegraph sting – it was a complete fishing expedition.

“At the moment journalists are more unpopular than politicians and they’re both less popular than estate agents. And should bloggers be regulated? That said, I don’t believe this proposal is in conflict with a free press so I back it.”

“We don’t have a free press at the moment, look at Richard Desmond, and look at Rupert Murdoch – too much of the media in the hands of a small self-serving elite so I back better regulation and I back the proposal.”

23 Responses to “Radical ideas for a progressive majority: Making the media more accountable”