Thousands of students across the country will protest against the scrapping of Education Maintenance Allowance today, with MPs voting on EMA tonight. 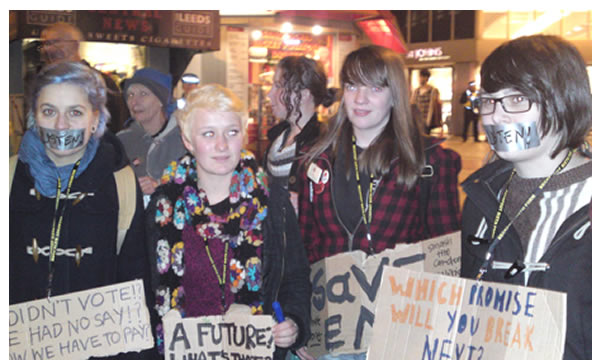 Thousands of students across the country will protest against the scrapping of Education Maintenance Allowance today, with a lobby of Parliament this afternoon as MPs debate the scrapping of the £30-a-week payment. Six hundred thousand teenagers from lower income families in English sixth forms and colleges receive the grant, which is due to be abolished in September.

Tonight, MPs will vote on an opposition day debate calling on the government to rethink its plans, with shadow education secretary Andy Burnham telling the BBC:

“The truth is some young people will drop out of education if the government proceeds with its plans… This debate is about the life chances of the least well off kids in our society – do we hold out for them the hope that they might go on to university or get the skills they need to make a success of their life.”

Of the government’s proposals to replace EMA ‘by targetting those at the bottom of the income scale’, he added:

“Well it sounds good doesn’t it but look at the reality: They’re promising a scheme that’s a tenth of the size, so there’ll be no support for nine in ten of the young people who currently receive EMA and that will mean that they have to drop out…

“EMA enables those youngsters from less well off homes to buy the books they need, or to buy the equipment that they need to support a vocational course, or perhaps more importantly, not to have to take a part time job so that they can then focus exclusively on their studies.”

A poll yesterday revealed that 70 per cent of EMA recepients would leave college if the support is axed, with 38 per cent saying they wouldn’t have started their courses were it not for EMA. The poll, by the University and College Union (UCU) also found that 63 per cent of recipients questioned said they received no financial support from their family for meeting the cost of college.

“If I’d been a backbencher I would have voted against [tuition fees], because I don’t support the policy, I didn’t support it at the time and I have made that clear…

“Nobody’s defending the present system as being perfect, but we do need a system that makes sure your travel costs are continued and the other things that act as incentives or disincentives are retained and I will seek to do that. I’m not a government minister but I will be making representations to make sure we go down that road.”

This evening, just as with tuition fees, voters will see whether Hughes and his colleagues stick to their word.