There has been apprehension at plans for a revolutionary decentralisation of NHS management, yet for NHS cancer services a similar experiment is well underway. 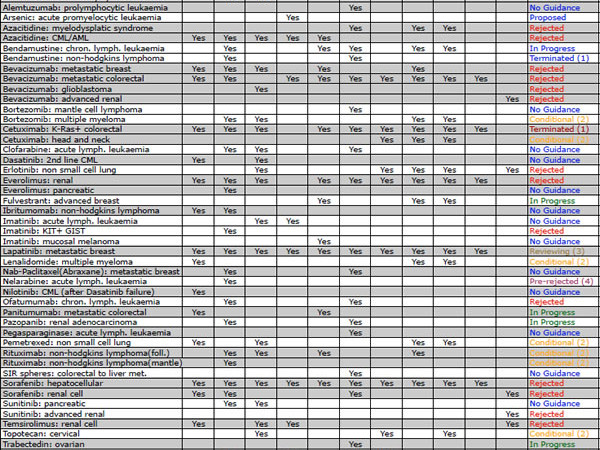 Stephen Henderson is a bioinformatics researcher at the UCL Cancer Institute

Recently the newspapers have been filled with apprehension at plans for a revolutionary decentralisation of NHS management. Yet for NHS cancer services a similar experiment is well underway. The Interim Cancer Drug Fund (ICDF) is £50 million of extra money (over 3 months) to purchase drugs that have been rejected or not yet approved by NICE. In contrast to the current system decisions on which treatments to offer are being made by local panels of clinicians within each Strategic Health Authority (SHA).

The MacMillan Cancer Fund has helpfully provided links for patients and doctors to ICDF information for each SHA. Eight of the ten SHAs have published guidelines on which drugs and cancers they will prioritise (8 out of 10). I have condensed the available information for ease of contrast in the table below (click the image to enlarge):

Firstly, to make the comparison possible I have simplified the exact drug and cancer combinations as most of the SHA guidelines are qualified by treatment history, cancer stages, molecular subtypes and so on.

Secondly, I have added a final column to show the NICE guidance. About a third of the 47 drug:cancer combinations were rejected after a full appraisal by NICE but many are still in progress, have been discontinued due to non-cooperation by the drug company (i.e. a tacit admission that they would have failed), or have never been appraised.

Thirdly, I have also added a Daily Mail column for my own amusement – these recommendations are drawn from an article from April 9th 2010 in which it claimed:

“NICE has delivered 15 rejections of cancer treatments in the past 18 months.”

Actually only five of the treatments (these are in the Daily Mail column) had been rejected by NICE, the rest were recommended or never appraised.

Finally and most importantly it must be stressed that if a drug and treatment is not mentioned here or if an SHA has not specifically mentioned it this does NOT definitively mean that it will not be funded. There are too many rare cancers and differing circumstances to be covered exhaustively by any set of guidelines. Some drug cancer combinations may have been judged too infrequent by other panels to warrant specific guidance.

And yet there is so much variation amongst the commonest cancers and drugs that it seems certain there will be many post code anomalies. For instance: colorectal but not breast cancer patients in Nottingham (East Midlands SHA) will be fast-tracked approval of Bevacuzimab (Avastin), whilst 40 miles up the M1 the situation is reversed in Sheffield (Yorkshire and Humber SHA) where breast but not colorectal patients are prioritised.

In Sheffield too patients will be confident of treatment with Pemetrexed or Erlotinib for non-small cell lung cancer whilst back down the road in Nottingham neither are mentioned by their SHA. Lung, colorectal and breast cancer are the first, second and third commonest cancers in the UK so if guidance is omitted this is surely a tacit statement that these treatments will not be forthcoming – and not an omission due to the rarity of these cancers.

Elsewhere there is equanimity on only two drug cancer combinations, lapatinib for breast and sorafenib for liver cancer. Whilst the Daily Mail will be chastened to note that no one else – either NICE or local panels – thinks Sunitinib or Bevacizumab for renal cancer is a priority. Indeed there are a few drug cancer combinations only mentioned by a single SHA – and this may be due to the strong influence a single specialist can have on a panel.

Overall there are such significant variations between SHAs that surely the post code lottery has arrived. Even the Daily Mail seems to have noticed this; but what were they expecting? Of course the extra money is welcome – so long as it isn’t surreptitiously subtracted from other areas of the NHS. Yet even within cancer services it is far from clear that this is the best use of such a sum of money (OK… it’s quite clear it isn’t).

And why did it have to be done this way creating a fractured service? Possibly in the future patient group pressure will lead to a ratchet effect with each SHA agreeing to fund drugs that nearby panels have approved and the funded treatments will gradually converge – so long as the money lasts that is.