The Daily Mail's undue emphasis on focusing on benefits claimants as immigrants disproportionately is not backed up by Office for National Statistics data. 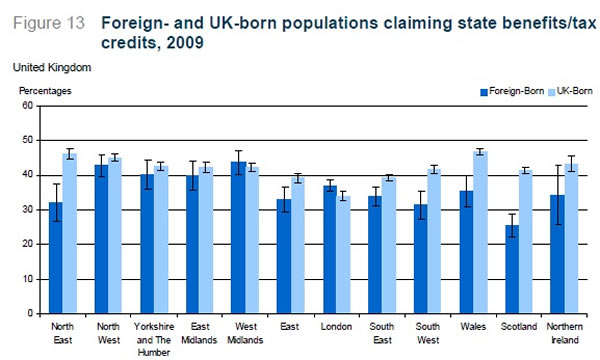 As reported in today’s Daily Mail, a smaller proportion of UK residents born outside the country receive welfare payments or tax credits than the population at large. Buried in paragraph seven in an article entitled “Migration wave means a third of Londoners were born abroad”, the biggest selling mid-market newspaper in the country reports:

“Fewer of the population of those born abroad claim state benefits or tax credits than native-born Britons.”

In fact, as demonstrated by the Office of National Statistics research paper on which the article is based, migrants are less likley to benefit from welfare payments or tax payments in all but two regions of the country, where the difference between native and non-native-born is negligible.

However, as the immigration debate has hotted up, the Daily Mail has published a series of articles focusing on immigrants claiming benefits, legally and fraudulently. They include:

• “Hundreds of thousands of migrants are here for handouts, says senior judge” (29 July 2009)

But an undue emphasis on focusing on benefits claimants as immigrants disproportionately is not backed up by this ONS data.