New DWP figures throw little light on household worklessness in Britain, and none whatsoever on youth unemployment, the purported subject of today’s stories. 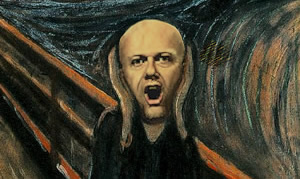 How old is a ‘young person’? The question is prompted by a Press Association story quoting employment minister Chris Grayling which also appears in today’s Daily Express. The story begins:

“More than 250,000 young people are growing up in a home where no-one has ever worked, according to figures published by the Government. Employment Minister Chris Grayling said the figures were a “ticking time bomb” left by Labour and were on top of 600,000 young people who have never worked since leaving education.”

That’s 250,000 young people in addition to 600,000 other young people. What is not immediately obvious is that the phrase ‘young people’ in these two sentences refers to two quite different age ranges.

Rather than trying to link these figures by asserting that one comes ‘on top of’ the other, it would be more accurate just to say that they are different figures.*

What is going on here? Does the coalition want us to start referring to people who have yet to reach their first birthday as ‘young people’? Or is this conflation of children and young adults intended to suggest that youth unemployment is primarily a condition passed on from one generation to another through ‘welfare dependency’, unaffected by such factors as recession, public sector job cuts, participation in education and government employment policies?

The latter would be consistent with the misdirection strategy adopted by DWP ministers since the election: using exaggerated claims about ‘welfare dependency’ and ‘intergenerational worklessness’ to divert concerns about the labour market impacts of the economic situation and the cuts programme. The abolition of Labour’s  Future Jobs Fund and Educational Maintenance Allowance have left the coalition particularly exposed on the issue of youth unemployment, while cuts to public sector jobs are also widely seen as likely to reinforce the employment disadvantage already faced by young people.

Concerns about the impact of job losses on young people are not misplaced, as Paul Gregg discusses here. Of course there are also longer term issues concerning labour market outcomes for some young adults, but these need to be distinguished from the ongoing effects of the recession, which current government policy seems unlikely to alleviate.

The chart below shows how unemployment has developed since the start of 2008 for the 18-24 year olds compared to the working age population as a whole: 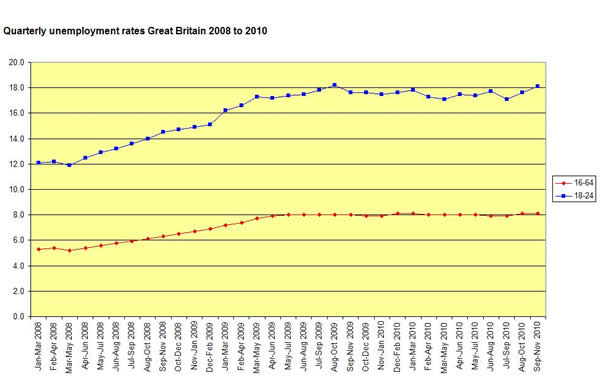 Youth unemployment rates tend to be considerably higher than for older workers, partly because unemployment is measured as a share of the economically active population (so educational participation, which reduces economic activity, tends to increase the youth unemployment rate). But even taking account of this factor, it is clear that the rise in unemployment since the start of 2008 has disproportionately affected young people, with the rate in September-November 2010 at 18.1% compared to 12.1% in January-March 2008, having hovered between 17% and 18% since mid-2009.

What about the 250,000 children in households where ‘nobody has ever worked’? It’s important to note just how uninformative and open to misinterpretation these figures are.

It is not just that the range of circumstances behind the figures need to be taken into account, as Nicola Smith rightly points out here. Another reason for regarding the ‘never worked’ figures as potentially misleading is that households change their composition over time: for example, a household in which nobody has ever worked is often the result of the break-up of a (previous) household where someone was working.

Finally we should note that the Department for Work and Pensions has not proposed, still less established, any relationship between the 250,000 children estimated to live in households where ‘nobody has ever worked’ and the 600,000 figure for young people who have not worked since they left school, or any other figure on young adults’ employment. Juxtaposing figures is not the same as drawing evidential links between them.

These figures taken on their own therefore throw little light on household worklessness in Britain, and none whatsoever on youth unemployment, the purported subject of today’s story. They would seem to have been published in order to illustrate a pre-conceived script which has more to do with deflecting legitimate concerns about the direction of policy than addressing the current unemployment problem.

In any case, he is back to conflating the 0-15 group with the over-15’s later in the sentence:

“Today’s figures on children growing up in workless households highlight once again the shocking betrayal of this country’s young people by the last Labour government.” [our italics]