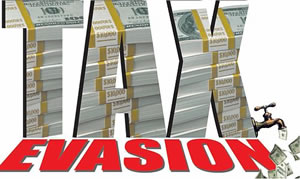 Lydia Prieg is a researcher at the new economics foundation (nef)

As today is the deadline for UK tax payers to submit their tax returns, it seems an appropriate moment to briefly reflect on the role Britain plays in facilitating global tax evasion.

We are used to thinking of tax havens as states that are wholly distinct from ourselves. However, a new book by Nicholas Shaxson argues that tax havens are in fact “controlled by the world’s major powers, notably Britain and the United States”.

For example, Britain has a large array of tax havens affiliated with it in the form of “Crown Dependencies”, which include Guernsey and Jersey, and “Overseas Territories”, such as the Cayman Islands.

A 2009 independent review commissioned by HM Treasury into the three Crown Dependencies and six of the Overseas Territories (hereafter referred to as “HMT review”) states that:

“Within the offshore market… the nine jurisdictions account for over 60 per cent of total financial flows through the banking system.”

Moreover, a recent OECD report claims that one of Britain’s jurisdictions, Guernsey, has not yet fully complied with the very minimal international standards on tax transparency. Nicholas Shaxson argues that the City of London has deliberately fostered this network:

“The British havens scattered all around the world’s time zones attract and catch mobile international capital flowing to and from nearby jurisdictions, just as a spider’s web catches passing insects.

“Much of the money attracted to these places, and the business of handling that money, is then funnelled through to London.”

Evidence cited in the HMT review corroborates this analysis:

“The UK has consistently been the net recipient of funds flowing through the banking system from the nine jurisdictions… The Crown Dependencies… provided net financing to UK banks of $332.5 billion in the second quarter of calendar year 2009.”

The UK often claims that these jurisdictions are fully autonomous, and that the UK is thus unable to influence their legislation. However, this claim appears suspect when one notes that the UK has intervened in the past.

For example, in August 2009 the UK government suspended their counterparts on the Turks and Caicos Islands for up to two years and imposed UK-rule, in response to widespread corruption inside the local government.

“These include the power of a Secretary of State to instruct the Governor in the exercise of his functions; the power to disallow Overseas Territories’ legislation; and (except Bermuda) the power to legislate for the peace, order and good government of the Territory by Order in Council.”

In addition, a National Audit Office report confirms that:

“The great majority of Territory citizens have been entitled to full British citizenship.”

The UK must no longer pretend it has nothing to do with this offshore network, and instead should shoulder its responsibility to guarantee the “good governance” of these jurisdictions. At the very least, the government should ensure that Guernsey meets the minimal international standards.