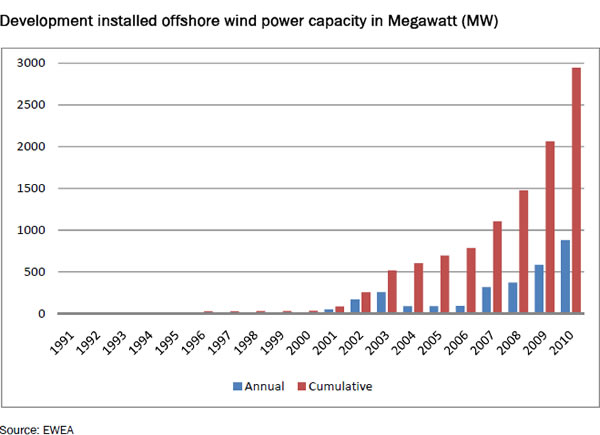 New statistics released today by the European Wind Energy Association (EWEA) confirm that the United Kingdom is the world leader in the wind power sector with 1,342 megawatts (MW) installed.

In Europe, Britain’s lead is followed by Denmark (854 MW), Holland (249 MW), Belgium (195 MW) and Sweden (164 MW). Germany, Ireland, Finland and Norway have a combined 145 MW between them. The UK’s strong performance, with wind power making up around 45 per cent of the total capacity installed (2,946 MW) will make happy reading for wind power advocates.

The country’s leading renewable energy trade association RenewableUK say the findings are evidence the offshore wind sector is on course to deliver renewable energy to a large number of customers as well as bringing serious economic benefits.

“The UK’s offshore wind roll out is continuing at full speed. Last week the first turbines at Walney and Greater Gabbard have started delivering electricity to the grid. Once completed these two offshore wind farms will take the UK over the 2 gigawatt (GW) mark.

“We now need to ensure that we are best poised to capture the full benefits such a massive infrastructure project offers, including increased employment and business activity.

“We should ensure that new UK based factories are supplying the turbines for those 19,000MW of consented wind farms and beyond. This is a once in a generation opportunity and there is no reason why, given the right policy framework, we shouldn’t stay on top of the offshore league”

The EWEA’s report also explains that with EU offshore wind power capacity approaching 3 GW there is now enough energy to power 2.9 million average EU households with electricity, which is comparable with the cities of Brussels and Berlin combined.

Whilst there are currently only 1,136 offshore wind turbines the EWEA also states that a massive 19,000 MW of offshore wind capacity is already fully consented in Europe. If constructed it could generate 66.6 Terawatts (TW) hours of electricity per normal wind year, sufficient enough to supply 14 of the largest capitals in Europe with power (including Paris, London and Berlin).

Wind has been the world’s fastest-growing renewable energy source for the last seven years, a trend which is expected to continue with the falling costs of wind energy and the urgent pressure internationally to tackle CO2 emissions to prevent climate change.

In less positive news for environmental campaigners, a new report from the Met Office and the University of East Anglia shows that 2010 was the second hottest year on record. Friends of the Earth’s Policy and Campaigns Director Craig Bennett said:

“We may have been trudging through deep snow last month, but these figures show there’s an enormous difference between climate and weather – despite the efforts of some to claim that global warming is a myth.

“Experts say climate change will increase extreme weather events, and from Brisbane to Brazil there have been numerous weather-related disasters in recent weeks. The economic consequences of failing to deal with climate change will dwarf our current financial difficulties.

“We can’t afford to gamble with the long-term future of the planet – those nations that have done most to cause this problem must now take a lead in tackling it.”

29 Responses to “Britain is the world leader in wind power”