Matthew Lockwood on the aftershocks of the financial crisis that continue to reverberate through real economies and government budgets around the Western world. 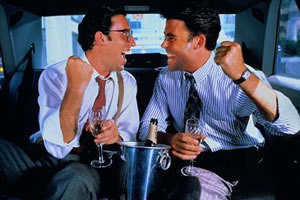 In Tom Wolfe’s great novel of the 1980s boom, The Bonfire of the Vanities, Sherman McCoy, a New York millionaire bond trader, is driving his mistress back to the city from the airport at night when he inadvertently drives into a scary, dystopian Bronx.

Finding the ramp back to the highway blocked by trash cans and a tyre, McCoy leaves the car to clear the way and is approached by two men on foot. His mistress thinks they are threatening McCoy, panics and as they flee in the car, they accidentally hit one of the men with the rear of the car.

From this dramatic opening, the novel goes on to chart the decline and fall of McCoy as a self-regarded “Master of the Universe”. By the end of the book he is ruined, penniless, abandoned by his wife and daughter, and facing trial for manslaughter.

The theme of hubris brought low by events is as old as Greek tragedy, and has resonated through the financial crisis (although this generation of Masters of the Universe has not been brought sufficiently low yet for some). But what makes The Bonfire of the Vanities so gripping is the way in which the narrative is driven by the contact between two polarised worlds, in a manner reminiscent of Dickens or Fitzgerald.

The man who has it all –  rich, clever, powerful – is undone by his encounter with the poverty-stricken underbelly of the city. And of course, it is the contrast between the two that is crucial –  if the Bronx had not been so poor, so abandoned to its fate by the class represented by McCoy, the incident that sparks his descent into Hell could not have happened.

As the aftershocks of the financial crisis continue to reverberate through real economies and government budgets around the Western world, it is becoming clearer that an analogous connection between the extremely rich and the very poor also had a major role in that crisis. Economists are beginning to realise that, while dysfunctional financial markets caused the crisis in an immediate sense, its deeper cause was inequality.

The markets failed because banks took on financial assets whose risk they had no real way of assessing correctly. At the heart of these assets were mortgages in the so-called “sub-prime” market – basically high-risk mortgages made to poor people with insecure and low-paid jobs. When these people started to default on their mortgages in large numbers in 2008, the whole complex system of securitised risk unravelled very quickly and dramatically.

An underlying question is why the sub-prime market arose in the first place. An important part of the answer is the stagnation of incomes in the bottom half of the income distribution in the US (and also in the UK to some extent) since the early 1980s. A related cluster of factors have driven this trend. A generation of IT-driven technical change has displaced manual and non-manual workers in routine tasks, and continues to do so (checkout workers in shops and supermarkets are the latest to be replaced by machines), increasing unemployment and squeezing wages.

In 2001, China joined the World Trade Organisation and started to make serious in roads into US and EU markets. China’s huge pool of potential workers, numbering in the hundreds of millions, placed downward pressure in wages both in China and elsewhere, over the course of the decade.

This view of the crisis has been around for some time, with commentators like Gerry Holtham offering an early analysis. However, the recognition that persistent inequality might cause financial crisis has now reached the heart of dominant economic thinking, with the publication of a paper by the International Monetary Fund in November last year.

The authors, Michael Kumhof and Romain Rancière, not only pick up the theme of stagnant incomes at the bottom, but link these to the huge increase in earnings at the top, which provides the other half of the story. By 2006, the top 1 per cent of taxpayers received almost one quarter of all income in the US – levels of inequality not seen since the Roaring Twenties, and which also preceded a major crisis. 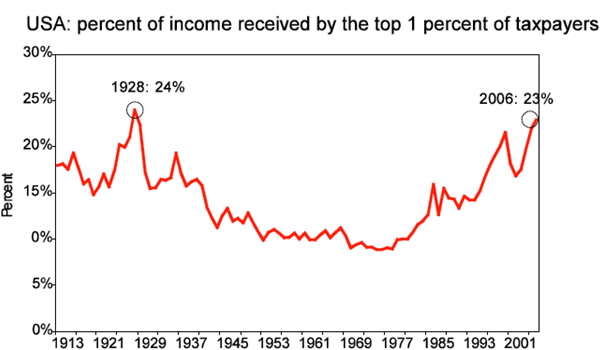 The wealthy needed to invest their money somewhere, and in Kumhof and Rancière’s analysis:

“The key mechanism is that investors use part of their increased income to purchase additional financial assets backed by loans to workers. By doing so, they allow workers to limit their drop in consumption following their loss of income, but the large and highly persistent rise of workers’ debt-to-income ratios generates financial fragility which eventually can lead to a financial crisis.

“Prior to the crisis, increased saving at the top and increased borrowing at the bottom results in consumption inequality increasing significantly less than income inequality. Saving and borrowing patterns of both groups create an increased need for financial services and intermediation.

“As a consequence the size of the financial sector, as measured by the ratio of banks’ liabilities to GDP, increases. The crisis is characterised by large-scale household debt defaults and an abrupt output contraction as in the 2007 U.S. financial crisis.”

Thus in the build up to the 2008 financial crisis, the worlds of the rich and the poor were really connected, not through an unexpected event in the Bronx, but through the need to lend on the one hand and the need to borrow on the other, although the impacts have been far more dramatic.

Two important possible consequences flow from analyses like this. One, as UCL’s Wendy Carlin argues, is that the economics profession and institutions like the IMF might not only begin to take into account the possibility of financial dysfunction, but also that they might start paying proper attention to long-term trends in inequality; the second is that policymakers might begin to recognise that extreme inequality is not only bad for the poor but also for the whole economy. In the words of Kumhof and Rancière:

“Restoration of poor and middle income households’ bargaining power can be very effective, leading to the prospect of a sustained reduction in leverage that should reduce the probability of a further crisis.”

14 Responses to “The bonfire of the inequalities”