Simon Hughes is coming under pressure to explain his decision to vote for the abolition of Education Maintenance Allowance, with Andy Burnham calling him a "yellow Tory". 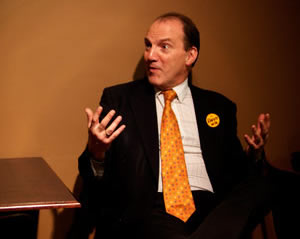 Simon Hughes is coming under pressure to explain his decision to vote for the abolition of the Education Maintenance Allowance – despite saying at the weekend that he would support an opposition amendment to maintain it “depending on the wording“. Shadow education secretary Andy Burnham last night branded Hughes a “yellow Tory“, and asked what the point of his new job was.

On Saturday, Hughes – who claims he is neither a backbencher nor a minister – told the Fabian Society conference:

“If I’d been a backbencher I would have voted against [tuition fees], because I don’t support the policy, I didn’t support it at the time and I have made that clear…

“My job now, the reason I’ve taken on the job I have is to mitigate the effect of the policy to make we have the best possible outcomes, and that does include the EMA debate, and just so people know, I have engaged already with Andy Burnham, about the future of EMA, we’ve had a very responsible and respectful both public and private dicussions.

“I will work with Labour and anyone else to make sure we don’t do things that disincentivise people from going to FE college, I understand it, nobody is defending the present system as being perfect but we do need a system…

“We do need a system that makes sure your travel costs, the kit you need, and the other things that act as incentives or disincentives are retained and I will seek to do that. I’m not a government minister but I will be making representations and trying to make sure we go down that road.”

But asked today what a successor scheme would look like, a Department for Education spokesman told Left Foot Forward that the scheme would only target the “10% of pupils who currently receive the EMA but say they would not stay in education without it” before adding “We are clear that no young person should be prevented from staying on due to financial constraints.” He went on to say:

“Full details have yet to be confirmed but we want it to be broadly based on the current ‘Discretionary Learner Support Fund’ which is administered by colleges and sixth forms to young people who can’t afford books, travel or other equipment for their course…

“We have not yet decided [how much money it will have] but we are clear that it will be a significantly increased pot of money (it is currently £25 million).”

This approach implies a cut of up to 95 per cent in the £574 million EMA budget – inconsistent with analysis from the Institute for Fiscal Studies which showed that the scheme paid for itself.

During the debate yesterday, Hughes said:

“… I am working with the Secretary of State, to make sure, as far as I can, that the successor scheme achieves the objectives that are expressed in both the Opposition motion and the Government amendment. If together we can do that, then together we will improve the reputation of this House and politics in this country.”

Left Foot Forward tried to contact Hughes’s office to find out whether he regards a cut in the budget of up to 95% as consistent with his stated objectives but he was unavailable for comment.

11 Responses to “Burnham: “What on Earth is Simon Hughes’ job all about?””