A group of academics have challenged Alex Salmond’s assertion that granting the Scottish Government full economic powers would significantly boost the economy. 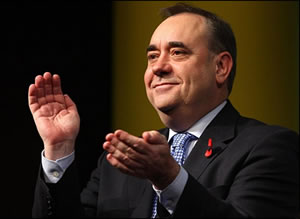 A group of academics have challenged Alex Salmond’s assertion that granting the Scottish Government full economic powers would significantly boost the economy. Speaking to the SNP’s annual conference last year the first minister had told delegates:

“We know thanks to the work of Andrew Hughes Hallett and Drew Scott that with economic powers we could grow the Scottish economy by an extra 1 per cent a year.”

The work he referred to was that carried out by Hallett and Scott last year in their study, “Scotland – A New Fiscal Settlement”.

Writing in the Scotsman, however, a group of six economic experts, five of whom sat on the Calman Commission, concluded that there was “a lot wrong” with the academic evidence used by Salmond to justify his argument, with calls for a “sober look” at the claims made by Hallett and Scott.

The latest questioning comes after the two Professors in question lodged formal complaints earlier this month with the Parliament’s Presiding Officer over what they felt were political driven questions by members of the Parliament’s committee examining the Scotland Bill currently going through Westminster, which cast doubt over the integrity of their work.

In their letter to the Scotsman, the 6 academics casting doubt on the research used by the SNP government to back its claim that fiscal autonomy would lead to economic growth explain:

• The report’s conclusions on growth remain in doubt given that it also used evidence from a study which suggested no link between growth and devolving taxation powers; and

• “Further difficulties” remain with the claim in the Hughes Hallett/Scott report that fiscal independence would lead to an increase of up to 1.3% in Scotland’s GDP for five years in a row, with no evidence cited for to support this assertion.

• Professors Scott and Hughes Hallett suggest setting up “a whole new public finance system for Scotland” based on a “frail foundation”.

“None of this tells us fiscal devolution would be bad for the economy, but it may help explain why politicians get engaged in the detail of the evidence.”

Opposition parties were united in their attacks on the government, with Labour MSP, Pauline McNeil declaring that “the SNP government’s argument for independence has fallen apart” and that its “credibility was deeply damaged by the way it has misrepresented the evidence on fiscal autonomy”.

Earlier this month, Labour called on Scotland’s most senior civil servant to investigate accusations that the government had misrepresented the evidence cited in two Government reports supporting fiscal autonomy.