Claire Leigh asks if the 'Untouchable' Dalit communities in India and Bangladesh will finally be embraced by the rest of society. 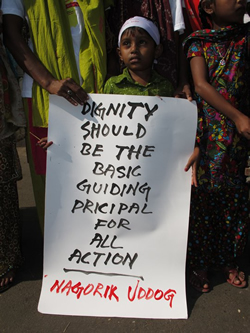 On World Human Rights Day, Claire Leigh, a strategy and policy advisor specialising in the areas of foreign policy and international development, asks if the ‘Untouchable’ Dalit communities in India and Bangladesh will finally be embraced by the rest of society

You may not know it, but today is World Human Rights Day. Coinciding the with the day that Liu Xiaobo fails to collect his Nobel Peace Prize, awarded for his tireless efforts to promote greater respect for human rights in China, this year’s celebration is a good time to reflect on the billions of people worldwide for whom the very concept of ‘human rights’ must seem like a meaningless abstraction.

I recently returned from Bangladesh, where I spent four days visiting projects supported by UK charity One World Action. Among other things, One World Action works with local NGO Nagorik Uddyog to promote the rights of the 5.5 million Dalits currently living in Bangladesh.

Dalits (often referred to as ‘Untouchables’) represent the lowest castes in the traditional Hindu hierarchy, historically engaged in trades and occupations that are considered ‘unclean’ such as sweeping, cobbling, disposing of dead bodies and manual scavenging (a euphemism for sewerage work).

In an endemically poor country, these people are the poorest of the poor; socially, economically and politically marginalised, Dalits are routinely denied even their most basic rights, ignored in public and despised in private.

The plight of Dalits living in India is well documented, having been brought to light by Ghandi as early as the 1930s. However, as most of the Dalits living in Bangladesh were brought in from India under the colonial regime, the majority-Muslim society has until recently regarded caste-based exclusion as an ‘Indian problem’ that does not concern Bangladesh, or at least a ‘Hindu problem’ that does not concern the vast majority of Bangladeshi society.

In the two days I spent visiting Dalit communities in and around Dhaka, the idea that Dalit exclusion is not a Bangladeshi problem became patently ridiculous.

Most Dalits in Dhaka live in so-called ‘colonies’, physically demarcated areas squeezed into the most crowded parts of the city. The entrance of the first colony I enter is marked by a discreet arch, covering a tiny alleyway which leads into a maze of narrow streets beyond.

Like Platform 9¾, you would not know it was there unless you were shown. Hidden away like this the colony seems to physically embody the marginalisation and exclusion of its inhabitants; out of sight, out of mind. Our driver Mintu had no idea such areas of town existed and was visibly taken aback by what we saw.

The first thing that hits you in the confusion of smells; open sewers mixed with frying spices and fresh laundry hung over the already crowded alleys, creating a kind of bunting of colourful dripping clothes. Then the inhabitants- not only the dozens of children that we gather as we walk around, but the thousands of flies that make the colony their home. As we tour round a maze of streets we see houses which are no more than small rooms, often home to families of eight people or more.

We see the temples and community halls that provide the only large spaces for the community to gather. We walk past the toilet block, an open space for showering with no separate areas for men and women, meaning people are forced to wash over their saris and lungis, denied even the privacy of their morning ablutions. The shared WCs are so few in number that they attract an even greater density of flies, gut-churning smells and angry queues of people.

But among the chaos and the squalor you also get a keen sense of a community increasingly aware of its rights and increasingly able and willing to fight for them. I met young women who were studying for college degrees, and who had chosen, rather than escaping their roots, to come back into the community to teach and lead.

I met mothers who had started women’s groups, providing the training, support and loans necessary to earn extra income and provide alternative occupations outside the traditional Dalit trades. And I met men and women who through groups such as Bangladesh Dalit Human Rights were advocating at the city and national levels to tackle Dalit exclusion, improve conditions and promote new laws to protect the human rights of all marginalised communities.

A rally organised by BDERM (Bangladeshi Dalit and Excluded Rights Movement) on my fourth and final day in Dhaka demonstrated just how far the movement has come in a few short years. Cars hooted their horns and cycle rickshaws rang their bells in solidarity as Dalit protesters marched past the National Museum proudly holding signs bearing a slogan that is hard to argue with: ‘Dalit Rights are Human Rights’.

As we marched with the crowd I looked to my left and saw that our driver Mintu had joined the protest, the newest convert to a growing movement.

6 Responses to “Will human rights have their day in Bangladesh?”