Will Hutton’s interim report on fair pay in the public sector, published yesterday, is packed with statistics illustrating what has happened to public sector pay over recent years. Importantly, it places these trends squarely in the context of earnings in the private sector. 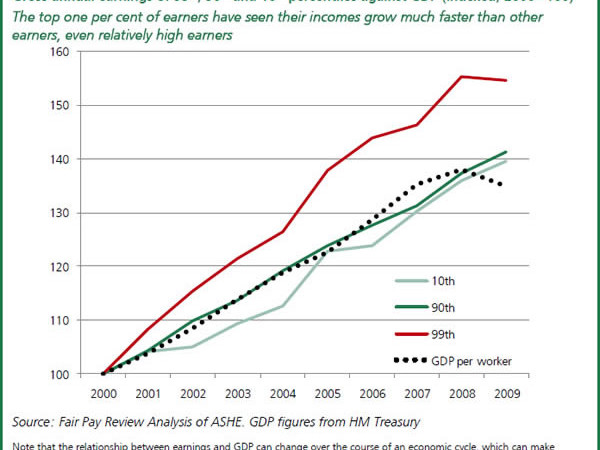 Will Hutton’s interim report on fair pay in the public sector, published yesterday, is packed with statistics illustrating what has happened to public sector pay over recent years. Importantly, it places these trends squarely in the context of earnings in the private sector.

Rising pay disparities have been a feature of the UK economy since the 1980s. In 1979, someone with earnings at the 90th percentile (putting them in the top 10 per cent) earned 2.5 times more than someone with wages at the 10th percentile; by 2009 this ratio had increased to 3.7.

This trend has been driven primarily by the private sector, and in particular through very large rises in earnings for people in the top one per cent (see chart 2.E).

Earnings for this group started at £117,523 last year and around 290,000 people fell into this bracket. Not surprisingly, public sector workers make up only a fraction of these top earners – Hutton estimates that just 20,000 have such high wages, and many are hospital consultants and other medical specialists. The proportion of top earners who are public servants has been falling as wages for this privileged minority have risen.

The boardrooms of major companies are where pay has really rocketed over recent years. Hutton shows that the ratio between the median earnings of FTSE 100 chief executives and those of the median UK employee almost doubled between 1999 and 2008, rising from 47 to 88 (chart 2.M). There is no evidence that company performance or the skills and commitment of CEOs witnessed a commensurate increase over this period (chart 3.D). Meanwhile, the earnings of the highest paid civil servants are nowhere near those of even averagely-paid company executives. This is not to deny that wages at the top end of the public sector have been increasing more than at the bottom, as Hutton shows (chart 2.J). Some of this is down to the changing balance of occupations in the sector and poor organisational governance, but it is also likely out-of-control executive pay has had a knock-on effect for top pay in the public sector. This suggests that the root of the problem is unlikely to lie solely in the public sector itself.

Agreed wage multiples as proposed by Hutton could have an important symbolic role, as well as helping to raise wages at the bottom or dampen future pay growth at the top in some parts of the public sector. But the limited role of public sector pay in driving pay differentials across the economy means that the impact on ‘fair pay’ would be very limited.

Top private sector pay, particularly in large firms, is the major driver of wage inequality, and this must be where future action is targeted.