Nick Clegg has some tough decisions to make, both on the national stage and a lot closer to home, and faces a lose-lose situation over Sheffield Forgemasters. 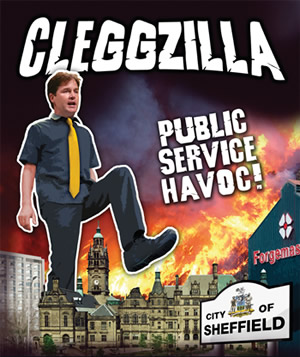 Six months is an eternity in politics and Nick Clegg’s career is no exception. The difference between ‘Cleggmania’ in May and the ‘great betrayal’ 0ver tuition fees in December shows how quickly things can change, however the deputy prime minister claims his current challenge has provoked more criticism than even the tuition fees u-turn.

In a city that has two universities (Sheffield and Sheffield Hallam) Mr Clegg has already taken some unpopular decisions in his constituency with the trebling of tuition fees and scrapping the education maintenance allowance, yet the cancellation of the loan to Sheffield Forgemasters may be his most difficult decision so far.

In an interview with Prospect Magazine, he describes that, in many people’s eyes, forming the coalition government with the Conservatives was his ‘original sin’. Furthermore, the deputy PM discusses the scrapping of the loan to Sheffield Forgemasters, in a city where a third of its employees work in the public sector and many more indirectly depend on state spending.

“That decision has played worse in Sheffield than the tuition fees decision partly because it links into that anti-Tory feeling, the belief that northern industry was abandoned.”

When questioned on why the loan was pulled when Britain was trying to mirror Germany in growing its economy through manufacturing as opposed to financial services, he replied:

“The trouble is the money that Labour had provided came from a budget in the business department that was running on empty. The treasury and Vince Cable felt it was wrong to take the money from somewhere else. But the whole issue could be revisited.”

The loan itself was to finance a 15,000 ton press to expand further into the area of civil nuclear power. Despite it being Liberal Democrat chief secretary to the treasury Danny Alexander who took the decision to axe the loan, Mr Clegg not only failed to overrule his colleague but spoke out in support of the u-turn on the issue.

Yesterday, a report by the Business, Innovation and Skills select committee provided more bad news for Mr Clegg over Forgemasters, rejecting the justifications put forward by him for withdrawing the loan.

Mr Clegg had claimed that the loan was unaffordable and that Lord Mandelson had been:

“… writing out cheques to companies like Forgemasters, which he knew would bounce.”

Yet the committee concluded:

“We are convinced that former Ministers signed off the loan in the full knowledge that it could be funded.”

“Do I think it is the role of Government to help out owners of companies who do not want to dilute their own shareholdings? No, I do not.”

He was again contradicted by the committee, which said:

“We conclude that a dilution in equity did not represent an obstacle to providing the loan.”

The findings were described by shadow industry minister Ian Lucas as “a humiliation” for Mr Clegg, “exposing that the arguments he put forward for withdrawing the Sheffield Forgemasters loan were simply not true”; Mr Lucas called on Mr Clegg to explain himself to the House of Commons.

Next year’s local elections may provide a more coherent test of his popularity and that of his new look coalition Lib Dems. The Liberal Democrats have 41 councillors to Labour’s 40, as well as two Green and one Independent. Whilst current national polling data suggests the Liberal Democrats are unlikely to retain control of the council, the question will be how they can mitigate their losses and will be a test of how popular he is in his constituency.

As one of the most visible and leading proponents of the coalition government;s tough austerity package, he has been at the forefront of making massive cuts throughout the country. What Mr Clegg faces now is a lose-lose situation.

On the one hand, Mr Clegg can stick to his rhetoric and not grant Forgemasters a loan, greatly damaging job creation in his constituency and not providing funding in the very industry Britain should be supporting. Alternatively he can take the safer political route at home while being accused of gross hypocrisy on the national scale and trying to save his own skin.

This is one situation where looking sad and wishing things could be different will not get Mr Mr Clegg out of trouble.