Despite hard talk over bankers' bonuses Nick Clegg is being accused of "hot air" over the issue by shadow Chancellor Alan Johnson, reports Chris Tarquini. 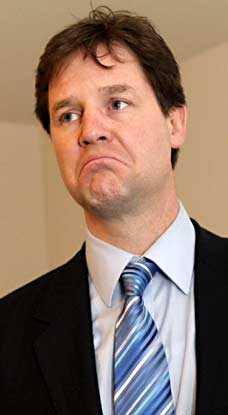 “Nick Clegg’s hot air on bankers’ bonuses is designed to rehabilitate a tarnished reputation. But he is deputy prime minister in an administration that will not even apply regulations that Labour introduced requiring banks to notify the public about individual bonuses in excess of £1m.

“And today we’ve learnt that Lib Dem and Tory MEPs have been encouraged to push for softer European rules on bonuses.

“Another day, another broken promise from this Tory-led Government and its Lib Dem frontman.”

The response will come as a big blow to the now perpetually depressed looking Mr Clegg who has seen his poll numbers plummet since the formation of the coalition, with his party taking a hard hit from the tuition fee u-turn last week. In a bid to outline his position on controversial banker’s bonuses, Clegg’s Financial Times article earlier had warned:

“They don’t operate in a social vacuum…. The banks should not be under any illusion, this government cannot stand idly by….. It is wholly untenable to have millions of people making sacrifices in their living standard, only to see the banks getting away scot-free”

Whilst the Deputy Prime Minister has certainly been talking tough on huge payouts to bankers he has consistently been undermined by the likes of George Osborne and his other coalition partners. This followed treasury officials telling the Financial Times on November 22nd:

“When he (Osborne) wrote his report (regarding bankers bonuses) in 2009 he envisaged his plan would be part of an international consensus. Doing this in the absence of international co-ordination could leave the UK exposed.”

“There are European rules being developed in this area and it might be better for Britain to promote this internationally rather than just unilaterally.”

The Deputy Prime Minister has been hit particularly hard today by a leaked memo in which the coalitions plan to water down bankers bonus reforms have been revealed. It seems that Christmas may come early for the bankers, but it may not be a happy new year for Mr Clegg.