Julian Assange tastes "the fresh air of London" as he is released on bail; Eric Pickles unveils savage cuts to local councils; and the rest of the week's news. 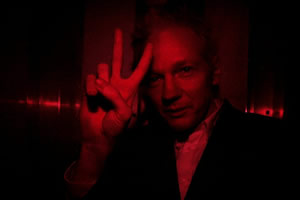 Left Foot Forward will be shutting down over the Christmas break, and will return to normal service on Tuesday, January 4th; your next Look Left will be sent out on Friday, January 7th.

If you’ve enjoyed reading Look Left, and enjoy reading the site, please donate whatever you can to help us continue our work in putting forward the progressive case and holding the coalition to account.

We wish all our readers a very Merry Christmas and a fantastic New Year! See you in January!

• The eyes of the world zeroed in on the dramatic scenes at the High Court last night as Wikileaks founder Julian Assange was freed on bail. Assange’s race-against-the-clock release after nine days in jail is the latest twist in the Wikileaks saga. Lapping up every second of his 15 minutes on the steps of the High Court, to the cracking of flash bulbs and cooing of fans, he said: “It’s great to smell the fresh air of London.” Adding: “I hope to continue my work and to continue to protest my innocence in this matter and to reveal, as we get it, as we have not yet, the evidence from these allegations.”

Today, speaking outside Ellingham Hall, the Norfolk estate where he is under ‘mansion arrest’, he claimed that Wikileaks faced “what appears to be an illegal investigation”, and that: “Certain people who are alleged to be affiliated to us have been detained, followed around, had their computers seized and so on.”

He defiantly concluded: “People like to present WikiLeaks as me and my backpack. It is not true. We are a large organisation. It is resilient. It is designed to withstand decapitation attacks, and our publication rate actually increased during the time I was in solitary confinement.”

Fighting talk, yet for as long as people are discussing court cases and allegations, extradition, bail and jail, the focus is away from the leaks themselves and what they reveal. How many people, for example, could reel off the latest revelations, as they might have done at the start of the process? When all’s said and done, cui bono?

• The main domestic political story this week was the cuts to local government unveiled by Eric Pickles. The communities secretary announced the cuts in parliament on Monday – yet the real damage being inflicted by his cuts, as with all the coalition’s cuts, took a few days to be fully realised. First and foremost, the cuts hit the poorest areas the hardest, as revealed by Left Foot Forward (see Evidence of the week below for further details).

Also on LFF this week, we revealed that Pickles was cutting grants to councils by 10 per cent, and by 18 per cent over two years; he was using smoke and mirrors to hide the scale of the cuts to councils; his localism bill was full of holes; the localism bill could pave the way to higher levels of inequality; and local authorities will face much higher cuts than he claimed. Who told all the lies, who told all the lies…

• The other major talking point around Westminster and in the media was the reopening of the drugs debate by Bob Ainsworth. Mr Ainsworth, the former Labour cabinet minister who was in charge of drugs policy under Tony Blair, became the most high-profile politician to break the conspiracy of silence among government and opposition and come out in favour of legalisation, for which he was denounced by the party hierarchy but praised by many others.

As leading Liberal Democrat blogger Mark Thompson wrote on Left Foot Forward: “Mr Ainsworth’s approach in attempting to spark a debate on this issue has been applauded across the political spectrum with support from former deputy Conservative leader and cabinet minister Peter Lilley, who wishes the issue would stop being used as a political football, as well as the senior Lib Dem MP Tom Brake.

“This is notable as on most occasions in the past when a politician has spoken out about this issue in such terms there is often no support from political opponents and they are left seemingly isolated… Bob Ainsworth is contributing to this in a positive way today and should be commended for doing so.”

Energy secretary Chris Huhne, who yesterday unveiled the coalition’s vision of a low carbon future. Addressing parliament, he promised to make Britain “one of the best places to do energy business”, encouraging the growth of environmentally friendly power. The proposals will see: reforms to provide long-term certainty for electricity investors; new markets having a built-in level playing field for low carbon; rules for existing investments protected; and the long term impact on household electricity bills lower than under the current market.

FIFA president Sepp Blatter, who said gay fans planning to go to the 2022 World Cup in Qatar should “refrain from sexual activity”. His remarks were roundly condemned, forcing him into a grovelling apology, claiming, laughably, that “it was not my intention and never will be my intention to go into any discrimination”. Why, then, did he lobby so hard to award the World Cup to the homophobic state? Everyone knew he was a sexist, anti-English ****; we now know he’s much, much worse.

Our research into the cuts to local government unveiled by Eric Pickles on Monday, which showed that Britain’s poorest areas would be the hardest hit. We carried out a simple econometric analysis of the local government cuts and compared the post-transition grant “change in estimated ‘revenue spending power’ 2011-12″ with the 2007 index of multiple deprivation – the last analysis available.

Scotland: Transport minister Stewart Stevenson was forced to resign following the poor handling of the impact of last week’s bad weather on Scotland’s transport network. Labour’s leader, Iain Gray, argued: “The first minister should not have stretched the issue out over the last week and acted more decisively at an earlier stage.” As bad weather was forecast for the weekend, Mr Stevenson’s successor Keith Brown pledged not to sleep on the job.

Meanwhile, education secretary Mike Russell outlined plans to maintain free tuition for Scots students, by charging more for English, Welsh and Northern Irish students who want to study in Scotland. Mr Russell explained: “South of the border the decision has been made that what will happen is the state will withdraw from its prime responsibility for paying for higher education. The Scottish government will not travel in that direction, because we very strongly believe that access to higher education should be based on the ability to learn, not the ability to pay.”

Northern Ireland: The latest round of WikiLeaks stories alleged that Gerry Adams and Martin McGuinness had prior knowledge of the 2004 Northern Bank robbery. Responding, the pair said: “We both absolutely rejected these unfounded allegations at the time and do so again today.” The Irish Times, however, was not so convinced, accusing Mr Adams of “brazen audacity”.

Finance minister Sammy Wilson, meanwhile, presented the executive’s draft budget with the introduction of a carrier bag levy and a pay freeze in the public sector. First minister Peter Robinson dubbed it a “first-class budget”. The SDLP and UUP remain to be convinced as their ministers abstained from approving the draft measures.

Wales: It was announced that the UK Department for Transport would be closing the doors on Milford Haven and Holyhead coastguard stations. Labour MP for Ynys Mon, Albert Owen, argued that the move would “put lives at risk”, whilst Conservative MP for Preseli Pembrokeshire and government whip Stephen Crabb admitted to having “serious concerns” over the moves to close the Milford Haven station.

Meanwhile, WikiLeaks revealed concerns that former Welsh Lib Dem MP and party president Lembit Opik had about Nick Clegg. Reporting to Washington, US Diplomats explained: “In Opik’s view, Clegg has surrounded himself with insiders who carry out his wishes without consulting others, thus allowing Clegg to avoid direct confrontation. Clegg derided one of Opik’s suggestions in front of the Lib Dem cabinet, then adopted it without telling Opik. When Opik confronted Clegg about it, Opik says he was immediately whisked away by a Clegg crony who begged him not to make a scene in public.”

The Netroots UK conference takes place in central London on Saturday January 8th, bringing together hundreds of grassroots activists in central London for a day of workshops, discussions and networking activity. Tickets are only £5 – to register click here.

The following weekend, on Saturday January 15th, Ed Miliband will be the keynote speaker at the Fabian Society New Year Conference. To book, click here.