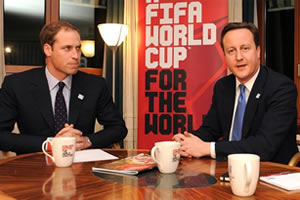 • In the week England lost out on the right to host the World Cup in 2018, David Cameron ordered a rethink of the government’s planned cuts to school sport. The prime minister told PMQs on Wednesday that he was “looking carefully” at Tuesday night’s Commons school sports debate, and that he hoped that he “will be able to make an announcement soon”. At last week’s PMQs, Ed Miliband had urged Mr Cameron to “overrule” the school sport cuts.

Left Foot Forward has long highlighted the issue of school sport cuts, and, as we reported yesterday, were he to change tack on school sport and invest rather than cut, it may enable the prime minister to leave a sporting legacy that will last long after 2018, so that by the time the World Cup does eventually come back to England – 2030 at the earliest – the nation might just have a team capable of winning it.

On the subject of the failed World Cup bid, many theories were expounded as to why we lost, some credible, some contemptible – like the Daily Mail article by Paul Harris which blamed “ethnically diverse figures” for the failure. Xenophobic, disgusting and illogical; as Left Foot Forward pointed out today:

“In addition to the sheer unpleasantness of Harris’s piece, on grounds of basic logic it just doesn’t add up – one of the key reasons London won the 2012 Olympics was precisely because we are so multicultural, because in London you will find people of every nationality, supporting all nations, with all competitors able to feel at home, and because the global legacy of our bid was greater than any other on offer.”

• Staying with education, and the row over tuition fears neared its denouement, with the government announcing the vote would take place in parliament next Thursday. Liberal Democrat ministers continue to vacillate over whether they will vote for the proposals – which Lib Dem business secretary Vince Cable drafter – abstain or vote against, which they had pledged to do during the election. As Harriet Harman said to Nick Clegg at Deputy Prime Minister’s Questions on Tuesday: “If you vote against, that’s the only principled position; if you abstain, it’s a cop out, if you vote for it’s a sell out. Which is it?”

Lib Dem Chief Secretary to the Treasury Danny Alexander faced the wrath of voters on last night’s Question Time over the issue, squirming as he was repeatedly asked (and repeatedly failed to answer) how he would vote. The Lib Dems had planned to make up their minds at a conference in London tomorrow, which has had to be cancelled after the venue, Haverstock School, politely told the Lib Dems they were no longer welcome. Further mass protests are planned for next week, building up to the vote.

• The main international story of the week was the Wikileaks Cablegate revelations. Each day, new stories emerge, each more fascinating than the last, with seemingly no nation, diplomat or politician exempt. Such has been the scale of the fallout, an arrest warrant has been issued for WikiLeaks founder Julian Assange, while the site has had to move its domain to Switzerland, changing its web address to www.wikileaks.ch, after its US service provider was subject to a series of cyber attacks.

But at what cost has all this information come? On Monday, Left Foot Forward’s Marcus Roberts reported that, long term, cablegate risks harming intelligence-sharing and US counter-terrorism efforts.

Captain SKA, who this Christmas will do battle with Simon Cowell’s latest X Factor wannabe for the XMAs number one slot – and raise money for good causes in the process. His hit video, “Liar Liar” – featured on Left Foot Forward last month – will go on sale on December 12th, with proceeds going to charities helping those worst affected by the coalition’s cuts (Crisis, Disability Alliance and Women’s Health Matters), and the new anti-cuts campaign network, False Economy, which launched this week.

The launch party for “Liar Liar” takes place at Vibe Bar in Brick Lane on Monday December 13th, and all readers of Left Foot Forward are invited; for tickets click here.

Fox News, the right-wing US broadcaster owned by Rupert Murdoch, which shocked even hardened viewers by claiming, wait for it, that the anti-fees student protests were a Tea Party inspired “rebellion against big government”, in a report headlined “Yankee Rebellion Resonates in Ye Olde England”. Watch for yourself and see it with your own eyes here.

There was a huge amount of data in Will Hutton’s report on fair pay in the public sector, which was published on Wednesday. As Kayte Lawton wrote on Left Foot Forward, there was plenty of evidence to show the pay of those at the very top grew faster than other earners, even relatively high earners. Hutton also revealed that the boardrooms of major companies are where pay has really rocketed over recent years, and the ratio between the median earnings of FTSE 100 chief executives and those of the median UK employee almost doubled between 1999 and 2008, rising from 47 to 88 per cent.

Green Party London Assembly member Darren Johnson, meanwhile, wrote on Left Foot Forward that Hutton’s idea of a ratio cap of 20:1 would not make pay fairer. Johnson said: “Hutton acknowledged that there is a danger of a cap becoming an upwards target, which senior staff could see as a new higher benchmark for their salary. But there is also a danger that such a high pay multiple as 20:1 sends out a signal that this level of pay is fair, which may in turn shift public attitudes.”

Scotland: Publishing the Scotland Bill, which will give greater powers to Holyrood, Scottish secretary Michael Moore said: “Future Scottish governments will have more accountability to the public for the financial decisions they make and will have access to significant borrowing powers. Devolution has worked well over the last decade but today’s Bill addresses a number of major issues and takes the settlement forward in a powerful and positive way.” SNP leader and first minister Alex Salmond responded: “People will be disappointed by a lacklustre Westminster Bill that tinkers around the edges, retains the key powers in London, and leaves big questions unanswered.” Meanwhile, Left Foot Forward reported on the SNP’s failure to meet its manifesto commitments on school sport.

Northern Ireland: As Peter Robinson told MLAs that the executive was “working hard” to agree a budget, businesses called for Stormont to gain control over corporation tax to stimulate the economy. In a joint letter to political leaders, a number of business groups wrote: “We believe that a reduction in corporation tax is the fastest way to rebalance and grow the Northern Ireland economy and create jobs. Without reform, the Northern Ireland economy will continue to be untenable and over dependent on Great Britain taxpayers.”

Wales: Describing the proposal as “fair, equitable and sustainable”, education minister Leighton Andrews outlined plans that would mean Welsh students would not be expected to pay the full increase in tuition fees being proposed by the British government. He said: “We do not support full-cost or near full-cost fees. We do not believe that higher education should be organised on the basis of a market.” Meanwhile, a year into the job, first minister Carwyn Jones enjoyed satisfaction ratings of 53 per cent just six months out from the Assembly elections. Speaking to the Western Mail, he called on Labour to run a positive campaign that excites Welsh voters.