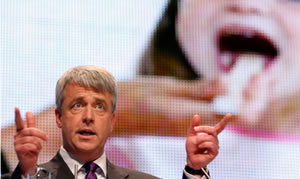 The Financial Times quotes a No 10 insider:

“Andrew [Lansley] has all the answers when he is asked the questions about how the implementation of all this will work.

“We are just not sure they are the right ones.”

Firstly, that the top priority for the NHS is improving productivity, meeting the challenge set under Labour in 2009 to save and recycle into NHS services £15-20 billion, or roughly 20% of the NHS budget, over 4 years. Secondly, that any other major changes, including Lansley’s reorganisation  – which a leading commentator described as “the NHS turned upside down” – must show they support the bigger prize of improving productivity.

The not so coded message is that a rapid and costly reorganisation risks destroying the NHS-friendly image that the Tories tried to promote during the election to detoxify their brand.

Dorrell will be mindful of the tight Spending Review settlement for health, despite its protected status. The Coalition’s promise of real terms growth year on year, turns out to be just a 0.1% increase per year – and that is before a £1 billion funding switch from the NHS to social care, to offset local authority cuts.

The language being used by senior players in the reform debate around the reforms is starting to get more strident. NHS Chief Executive David Nicholson conceded at the last Health Select Committee that some Primary Care Trusts are  “in meltdown”, despite the protestations of Lansley sitting alongside.

The new head of the GPs professional association, Dr Clare Gerada, went public recently with criticisms that patients’ trust for family doctors would be compromised and that rationing decisions will be passed down from NICE to individual groups of GPs.

“I think it is the end of the NHS as we currently know it, which is a national, unified health service, with central policies and central planning, in the way that Bevan imagined.”

The publication of the Health Bill to progress the reforms has now been delayed until January, supposedly due to the large number of White Paper consultation responses.

Yet Andrew Lansley has staked his reputation on these reforms and is keen to press ahead. He plans to announce the first wave of GP commissioning pilots next week.  He has also finally acknowledged that “it’s a reorganisation, of course it is” in a Prospect magazine interview, despite the pledge in the Coalition Agreement of no top down NHS reorganisations.

Meanwhile, a PCT chief executive, talking this morning about the reforms at a public meeting, said the NHS is:

“…at risk of blowing it. This could be a bloody awful train crash. It could collapse.”

10 Responses to “Lansley: now scrutinised by his own side”