Iain Duncan Smith has again misused statistics on Britain's welfare bill. He wrongly told The Sun that the out-of-work benefit bill was a "huge reason" for the deficit. 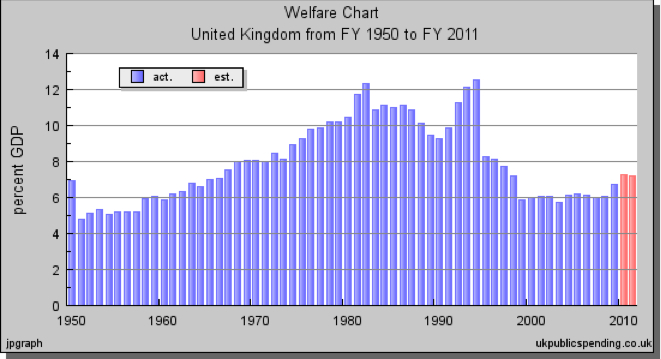 Fact-checking website Full Fact have also looked into IDS’s misleading briefing to The Sun, pointing out that:

“…the Sun report also fails to take into account the change from Incapacity Benefit to Employment Support Allowance, a system that came in during 2008. The study also shows that of the people claiming the new benefit, 93 per cent had face-to face ‘Work Capability Assessments’.

“Given that Full Fact has previously complained to the UK Statistics Authority about the inaccessibility of DWP data, the concerns highlighted here show just how important it is for Government departments make the information they are submitting to the press accessible to all.”

“…still trying to obtain figures from the Department to establish what proportion of people were exempt from undergoing any form of PCA [Personal Capability Assessment] in the period covered by the figures quoted in The Sun.”

Iain Duncan Smith has once again been playing fast and loose with statistics on Britain’s welfare bill. The latest embellishment in today’s Sun follows a rebuke from the Chair of the UK Statistics’ Authority last week on IDS’ department’s use of statistics.

Today, IDS claims that out-of-work benefits are “a huge part of the reason” for Britain’s deficit. The numbers are lower than in 1997 and the cost increase since the start of the recession has been due to rising unemployment.

Paying a fortune to the five million on handouts – like X Factor reject Wagner Carrilho – is a major reason the UK’s deficit soared to a crippling £155billion, Tory minister Iain Duncan Smith told The Sun…

[IDS said,] “We have managed to create a block of people in Britain who do not add anything to the greatness of this country. They have become conditioned to be users of services, not providers of money. This is a huge part of the reason we have this massive deficit. We have had to borrow vast sums of money. We went on this inflated spending spree.”

The graph below shows how Britain’s welfare budget has changed since 1950. It shows a minor uptick in the welfare budget in the last three years – dwarfed by the cost in the 1980s and 1990s. On the eve of the recession in 2006-07 when the Tories supported Labour’s spending plans, social security benefits amounted to £131.3 billion (Table C9). According to the OBR, this figure is expected to increase to an estimated £169.3 billion (Table C13) in 2010-11. Adjusted for inflation, the increase – due primarily to increasing unemployment – is equivalent to £24.1bn in today’s prices or just 1.64% of GDP – a small proportion of 10.1% deficit.

The number of people on out-of-work-benefits increased since the start of the recession after falling for a number of years. The rise was due to an increase in unemployment. The total figure of 5.34m in 2009 is lower than the 5.95m who were on out-of-work benefits in 1997 when the Tories were last in power.