IDS has dodged questions from Left Foot Forward regarding the misuse of DWP statistics. 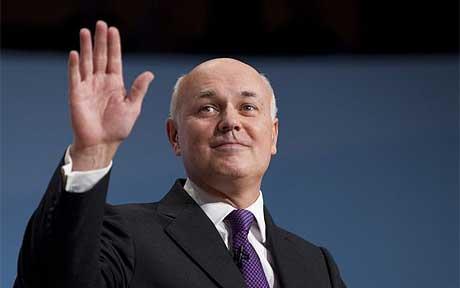 In response to a question from Left Foot Forward at an ippr seminar today, the Secretary of State for Work and Pensions, Iain Duncan Smith, responded by dodging the question.

Despite being asked about three different incidents of using misleading statistics, Mr Duncan Smith addressed only one. The question involved the numerous times IDS has used incorrect information:

“In recent weeks, the Chair of the UK Statistics Authority has written to your department hightlighting ‘serious deficiencies’ in DWP’s use of statistics; you were forced to correct the record three times in the House of Commons; and you erroneously told The Sun that welfare recipients were a ‘huge part of the reason we have this massive deficit’ when welfare payments are still well below where they were in the 1980s and 1990s as a proportion of GDP.

“Given there is cross-party support for the principle behind the universal credit, why do you feel the need to mislead the public on the welfare burden in the UK?”

Rather than responding directly to the question, IDS used the opportunity to sidestep the issue and instead criticised Left Foot Forward for “scrambling around in the minutia of the real debate”:

“The figure you’re talking about with regards to housing benefit was when I was in the middle of a debate and I used a quote off the national statistics, in fact the phrase I used throughout was national statistics. I accepted that was a slip of my tongue in the terms of the debate but I corrected it immediately.

So if you don’t mind me saying you’re scrambling around in the minutia of the real debate which by all means Left Foot Forward can carry on doing and I enjoy reading your blog nonetheless.”

We’re grateful that the former Tory leader enjoys reading this blog. As assiduous followers will know questions remain unanswered about why the public has been repeatedly misled by DWP on welfare reform. As well as failing to address the fact that he was forced to correct the record three times in the House of Commons, IDS also failed to acknowledge his erroneous remarks to The Sun. Perhaps upon realising this error Mr Duncan Smith will finally answer the questions that still surround his statistics.