George Osborne set out yesterday that the VAT rise to 20% would be permanent. Left Foot Forward sets out five facts about the regressive and avoidable tax rise. 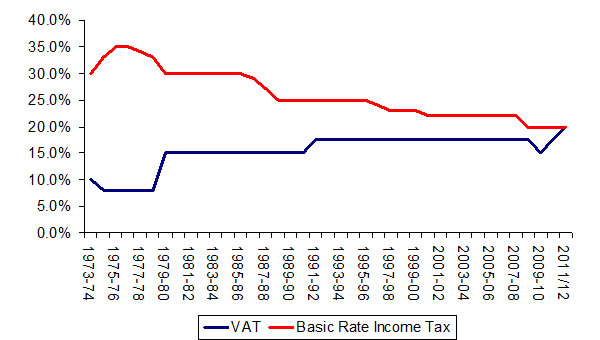 The right–wing press are surprisingly alone today in reporting remarks yesterday by George Osborne to The Spectator. The Chancellor said:

Left Foot Forward sets out some facts about the tax rise.

1. The VAT rise is avoidable

2. VAT is a regressive tax

Using data from the ONS, the Fabian Society’s Tim Horton has said, “The richest 10% pay one in every 25 pounds of their income in VAT; the poorest 10% pay one in every seven pounds as VAT”. There is a debate about whether VAT remains regressive when measured against households’ spending rather than income. But on Tax Research UK, Richard Murphy has explained why this is only true if the poor have savings, access to borrowing, and the same consumption patterns as the rich. As The Guardian‘s Aditya Chakrabortty has concluded, “since VAT takes no account of one’s ability to pay, it cannot be called progressive.” Even the TaxPayers’ Alliance accept that “VAT hits the poor twice as hard as the rich“.

3. VAT hits the north harder than the south

Research published last week by the marketing firm, Acxiom, shows that there is a north-south divide in the impact of the VAT rise. The study showed that London and the South East were more resilient to the tax rise than other regions. Among the ten places least affected by the VAT rise were the Tory heartlands of West Berkshire, Buckinghamshire, Surrey, Hertfordshire, Wokingham, Windsor and Maidenhead, and Oxfordshire where David Cameron’s Witney seat is situated. Meanwhile Hull, Blaenau Gwent, Stoke-on-Trent, Leicester, Middlesbrough, Orkney, Eilean Siar, Ceredigion, Merthyr Tydfil, and Gwynedd will be worst affected.

4. The increase is the fourth rise in VAT by a Tory government

As Duncan Weldon has shown:

“When VAT was introduced, by a Conservative government in 1973, it was set at 10 per cent. Geoffrey Howe, despite promising not to “double VAT” in the 1979 election campaign, raised it to 15 per cent. It was then increased to 17.5 per cent by Norman Lamont.

5. The VAT rise is a broken promise

On April 1st, David Cameron told Sky News, “our plans don’t involve an increase in VAT” while after the election in mid-May, the new Prime Minister told Andrew Marr that a VAT rise was “not something we plan to do“. Next Left saw it coming and raised the spectre of the “Geoffrey Howe dodge” in April in honour of a previous Tory broken promise on VAT.

As with tuition fees, the Liberal Democrats campaigned heavily on the issue of VAT publishing posters declaring “Tory VAT bombshell: You’d pay £389 more a year in VAT under the Conservatives“. An example, perhaps, of sticking a bit too closely to their pledge of “no more broken promises“.