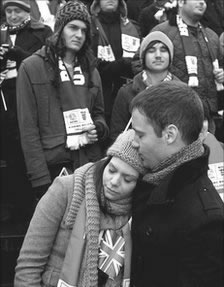 There is still, however, an opportunity for the prime minister to leave a sporting legacy that will last long after 2018 – by abandoning plans to cut school sports funding, a policy he has ordered education secretary Michael Gove to take another look at.

This morning’s papers were full of stories about the rethink on school sports, following Mr Cameron’s remarks at yesterday’s Prime Minister’s Questions, namely this reply to a question from former sports minister Gerry Sutcliffe:

“… I am looking carefully at yesterday’s debate [on school sport – see the LFF report here]. We all have a shared interest: we all want good sport in schools and more competitive sport, and we all have to ensure that money is spent well.

“Everyone accepts that not every penny was spent well in the past. There is a quite bureaucratic system. The Secretaries of State for Culture, Olympics, Media and Sport and for Education are working hard on this issue.

“We are talking with head teachers to ensure that what we come up with works on the ground. I hope that we will be able to make an announcement soon.”

Shadow education secretary Andy Burnham, one of three Labour MPs who have written to Mr Gove urging him to think again, welcomed the news of the review, saying:

“In the last 24 hours, we have heard a huge change in tone on this issue from both the Prime Minister and Michael Gove. It seems they now admit that they got it wrong and that school sports partnerships have been a success.

“This apparent change of heart is welcome and will give a glimmer of hope to the thousands of young people, head teachers and athletes who have called on the Government to reverse their decision to scrap school sport partnerships. However, hopes have been raised, and now must not be dashed by an inadequate response from the Government…

“The ball is now in Mr Cameron and Mr Gove’s court.”

Left Foot Forward has long covered the coalition’s planned cuts to school sport, cuts which, in response to the widespread grassroots campaigns against them, might not now happen. Were the prime minister to row back on this policy and continue to invest in school sport, by the time the World Cup does eventually come back to England (2030 at the earliest), the nation might just have a team capable of winning it.

24 Responses to “2018 may be lost, but PM can still deliver a brighter future for school sport”